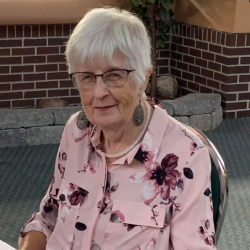 It is with profound sadness that the family of Marilyn Bernice (Morrissey) Stewart, of Penniac, NB, announce her passing on November 15th, 2022, at the Dr. Everett Chalmers Hospital in Fredericton. Born in Saint John, NB on September 26th, 1940, she was a daughter of the late Emmerson and Dorothy (Preston) Morrissey.

Marilyn took in many children as a foster parent, she enjoyed; 4wheeling going on the side by side, horses, bingo, knitting and sewing.

Along with her parents, she was predeceased by her Husband Neville Stewart, daughter Victoria Stewart and a sister Patricia Morrissey.

A celebration of Marilyn’s life will be celebrated from 12-2 PM on Sunday November 20th, 2022, from Bishop’s Funeral Home, 540 Woodstock Road.  Interment to follow at 3 pm in the Penniac United Church Cemetery.

A special thank you to nurses at the DECH Emergency Department and 4SE for the care and compassion shown to Marilyn during her time there.

For those wishing to make a donation in Marilyn’s memory, the family has suggested the Alzheimer’s Society. Online condolences and sharing of memories can be made at www.bishopsfuneralhome.com