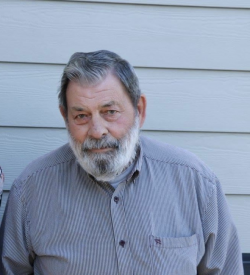 It is with profound sadness that the family of Neville Goldwyn Stewart, of Penniac, NB, announce his passing on September 20th, 2022, at Hospice House in Fredericton. Born in Penniac, on September 30th, 1938, to the late James K.  and Daisy (Tapley) Stewart.

Neville’s greatest hobby was working. He spent many years as a mechanic, loader operator and raised beef cattle. He had a love of all animals, especially cows, and horses. When he wasn’t working, he enjoyed spending time on the side by sides.

Along with his parents, he was predeceased by a daughter, Victoria (Vicki) Stewart, brother, Eldridge McIntosh, and sisters, Inez Bubar, Pearl Raymond, Rozell Emma McIntosh, and infant Lilly Mary Stewart.

The family would like to extend a huge thank you to the staff at Hospice House Fredericton, for their kind and loving care, and professionalism.

There will be a committal service on Saturday, September 24th, 2022, at 1pm, at the Penniac United Church Cemetery. Immediately following the burial, there will be a celebration of Neville’s life until 4:30pm at the Bishop’s Funeral Home Chapel, 540 Woodstock Road, Fredericton, NB. For those wishing to make a donation in Neville’s memory, the family has suggested Hospice House Fredericton, and the Canadian Cancer Society. Online condolences and sharing of memories can be made at www.bishopsfuneralhome.com