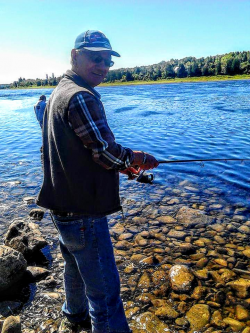 A recent recipient of the Charles Solomon award, Victor was a Wolastoqey Language Keeper and elder who graciously shared his love for the language across Wolastoqey territory as a teacher. An avid, lifelong fisherman, he was born, raised, and spent most of his life on the Wolastoq River. His work as an auxiliary RCMP officer, youth counselor, and social worker showed his dedication to the health and safety of his community. Known as "Russ" and "German", Victor was also known for his legendary softball arm and his hearty laugh. He loved tending to his lawn and garden, the berry patches and trees in his yard, making wreaths for family and friends, scouting brooks and streams for new fishing spots, foraging for fiddleheads, cooking, cheering on his beloved Blue Jays and Leafs, and flipping the channels between Y&R and the WWF. But there was nothing like spending time on the Wolastoq, fishing rod and tackle box in his hand and ever-present cigarette dangling from his lips.

It gives the family some peace that Papa is finally reunited with his "Punkin", Kasey Margaret.

Resting at 110 Tomahawk Street, Kingsclear First Nation on Monday, July 4, 2022 to Wednesday July 6, 2022. A celebration of Victor’s life will be held on Thursday, July 7, 2022 at St. Ann’s Catholic Church, Kingsclear at 11:00 AM with Father Curtis Sappier officiating. In lieu of flowers, donations can be made to the Kehkimin Wolastoqey Language Immersion School.