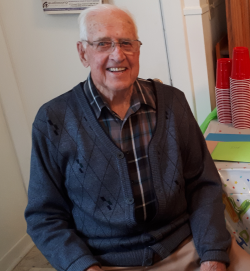 Peacefully at his home, Dick Yeomans passed away on June 24th, 2022. Dick was born in Fredericton NB on September 12, 1929, to his parents, the late George (Buck) Dean Yeomans and Mabel Bishop. He was also predeceased by his Step-Mother Marion.

He enjoyed gardening and was an honorary member of the Thistle Fishing Club. Salmon fishing was another of Dick’s passions and over the 60 years that he fished; he was known to have landed some beautiful salmon.

Dick was very proud of his accomplishments during his career with NB Power where he started out as a meter reader, then a lineman, and a District Manager in Woodstock. He then moved back to the City of Fredericton to become Manager of the Marysville Service Center and Central Stores. Later he moved to the NB Power Head Office on King Street Fredericton before his retirement.

Copeland ; half-sister, Joan Moller (Rolf ). Dick is also survived by his friend and the mother of his children,
Fran.

At Dicks request, there will be no visitation or funeral services. Bishops Funeral Home and Crematorium, 540 Woodstock Road, Fredericton NB, have been entrusted with the arrangements.

Online condolences and sharing of memories may be made at www.bishopsfuneralhome.com
Memorial donations in Dicks memory may be made to Miramichi Salmon Association.

The family would like to thank the Extramural staff and Health and Home Care Specialist Chantal Condly as well as Dr. Stymiest who provided our father the kind and loving care before his passing. Also the family wishes to thank Dick’s friends Dale Duplessis, Doug Crocket, Greg and Wanda Brown, Eric Hicks and John Jewett.