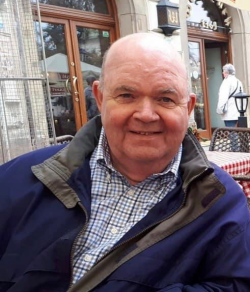 TO VIEW FUNERAL SERVICE PLEASEGO TO

or   https://m.youtube.com/watch?v=sV-yzniUKIQAND SCROLL TO BOTTOM OF PAGE, FUNERAL WILL BE LIVE.

It is with deep sorrow and much love that we mourn the sudden passing of Michael John Anthony McIntosh who died at home in New Maryland on May 4, 2022, at the age of 74.

Born in Saint John, New Brunswick, Mike was the son of the late Michael A. McIntosh and Elizabeth (Whalen) McIntosh.  He was also predeceased by his brother Rayford and his wife Donnelly (Marks) McIntosh. At St. Malachy’s High School, Mike was an enthusiastic Rugby player, who played to avoid the potential harassment of his peers for being in the school choir.  He continued these interests in his days at St. Francis Xavier University, where he met his best friend and wife, Mary Jo.

Mike was known as an integral part of his church community, at the church of Sts. John and Paul in New Maryland.  He was a founding member (Chainsaws and beverages in tow) of the parish in 1978 and has been an active member ever since.

He was a proud civil servant both at the federal and provincial levels.  He truly believed in the importance and value of his work.  Mike especially enjoyed his work with the New Brunswick Community Colleges and the level of commitment in the people with whom he worked. His career has provided him with many life-long friendships that continue today.  After his retirement, Mike spent his time cooking, reading anything that he could get his hands on, travelling with Mary Jo, and spending time with his family.  He also longed for the day that the Leafs would finally win the cup. . .  in colour.

Mike will be remembered for his unique sense of humour, his love of family, but mostly for the kindness and goodness that he brought to the world.

Visitation will be held from 3:00-6:00 pm on Thursday, May 12th, at Bishop’s Funeral Home 540 Woodstock Road.  A funeral mass will be celebrated at 11:00 Friday, May 13th at St. Dunstan’s Catholic Church on Brunswick Street.  The burial will follow immediately after.  The service will also be livestreamed & can be viewed by clicking on his obituary on the funeral homes website. The family is asking all who attend the visitation and the service to please wear masks.

In lieu of flowers, the family has requested donations to the Heart and Stroke Foundation, Greener Village, or the Fredericton Homeless Shelters Inc. or the charity of the donor’s choice.

Bishop’s Funeral Home & Crematorium, 540 Woodstock Road Fredericton have been entrusted with the arrangements. Online condolences and sharing of memories can be made at www.bishopsfuneralhome.com