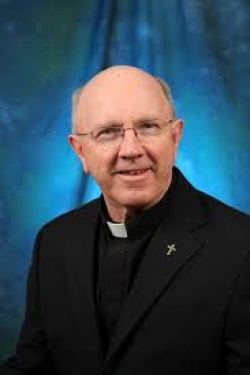 The livestream for the funeral service  can be viewed by going to see https://stdun7.wixsite.com/stdunstansparish  And clicking the green stream button at the bottom of the webpage.

The death of Rev. H. Monte Peters, a priest of the Diocese of Saint John, occurred at his residence, St. Kateri Tekakwitha Rectory, surrounded by his family, on Tuesday, May 3, 2022, at the age of 80, after a brief illness. H. Montague Peters was born in Saint John, NB, on January 27, 1942, son of the late Dr. Harry Peters and Margaret Montague.

After attending schools in his fondly remembered West Saint John, and graduating from High School, Monte completed a Bachelor of Arts degree from St. Francis Xavier University, Antigonish, NS, and a Bachelor of Education degree from the University of New Brunswick, Fredericton. He also studied at St. Thomas University, Fredericton. In 1966 he began theological studies at Holy Heart Seminary, Halifax. After completing his Bachelor of Theology degree through Laval University, Quebec, QC and his seminary formation, Fr. Monte was ordained to the priesthood by the Most Rev. J. N. MacNeil, Bishop of Saint John, on July 4, 1970, in Our Lady of the Assumption Church, Saint John.

His first assignment was as associate pastor of Holy Trinity Parish, Saint John. He was also named Vocations Director of the Diocese at this time. In 1971 Monte was transferred to St. Dunstan’s Parish, Fredericton, and was given special responsibility as chaplain to the Catholic students at the University of New Brunswick, Fredericton. Thus began a special relationship with the students, faculty, and staff of the University of New Brunswick which would last formally for more than several decades and informally for the rest of his life.

From 1976-1977, Monte undertook a sabbatical year studying campus ministry throughout England. He travelled to Manchester, his base, on a German freighter transporting lumber and newsprint from Halifax, NS, to Liverpool, England. While in England he travelled wherever he could to learn from other campus ministers working in an ecumenical context while also assisting in St. Cuthbert’s Parish, Manchester.

The door was always open; students knew they could find an open ear, a cup of coffee, a meal, or even a couch to spend the night if necessary. Friday nights spaghetti suppers were famous. In 1984 when the University of New Brunswick opened Holy Rosary Co-ed Residence, Monte was called on to to serve as temporary Don. In 1990-1991, he also served as chaplain to St. Thomas University, Fredericton, while continuing his work at UNB. In 1991, Monte began a Master of Arts degree in Adult Christian Community Development at Regis College, Denver, CO, which he completed during several summer sessions so as not to interfere with the university academic year.

In 2013 he was appointed pastor of Holy Family Parish, Fredericton, while continuing also at St. Anthony’s. When the Diocese of Saint John was reorganized in 2018, Monte became the first pastor of the newly formed St. Kateri Tekakwitha Parish serving churches from McAdam to Hanwell to Fredericton to Cork to Lake George to Newmarket and the Kingsclear First Nation.

Monte humbly and quietly received many accolades during his more than fifty years of priesthood including the Fredericton YM-YWCA Peace Medallion (1989) and a Doctor of Laws, honoris causa, from the University of New Brunswick (1995).

Monte also served in the Naval Reserves for over thirty years and taught sailing courses at the Fredericton Yacht Club for many of those years. In addition, he served as chaplain to the Fredericton Police Department.

Father Monte Peters was an extraordinary man and priest who quietly, humbly, and generously served the Diocese of Saint John, the City of Fredericton, and its surrounding communities, and especially generations of students, faculty, and staff of the University of New Brunswick and St. Thomas University. He also enjoyed a special relationship with the peoples of Sitansisk Wolastoqiyik First Nation and the Kingsclear First Nation. He gave to all with grace, dignity, and usually a little joke! He accepted his final illness with Christian grace only wishing he could have said goodbye to more of the many people who had been so kind to him over the years.

Visitation for Father Monte will be held at Holy Family Church, 1500 Hanwell Road, Fredericton, on Friday, May 13, from 2 pm to 7 pm closing with a simple prayer vigil.

His Funeral Mass will be celebrated by the Most Rev. Christian Riesbeck, C.C., Bishop of Saint John, in St. Dunstan’s Church, 120 Regent Street, Fredericton, on Saturday, May 14, at 10 am. Rev. John Jennings will be the homilist. Interment will follow in the family plot, St. Augustine’s Cemetery, Grand Bay-Westfield.

The family has requested that in lieu of flowers, donations may be made to the Diocesan Indigenous Reconciliation Fund. Arrangements under the kind care of Bishops Funeral Home. Online condolences and sharing of memories may be made at www.bishopsfuneralhome.com

A live stream of the Funeral Mass will be available by accessing the Link found on Father Monte's obituary. In case of technical difficulties, the Funeral Mass will also be recorded and downloaded to his obituary after the service. The church has asked that masks are to be worn for the visitation and service.