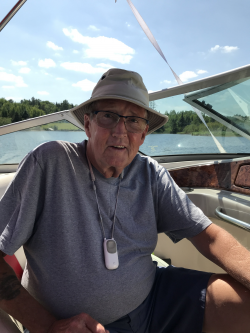 It is with heavy heart that the family of David William Scott announce his passing on April 29th, 2022, at the Dr. Everett Chalmers Hospital in Fredericton, NB. Born on April 6th, 1943 in Sussex England, he was a son of the late Ethel Scott (Jones).

Dave was raised in Fredericton, NB and at a young age he joined the Navy to see the world, then returned to graduate from UNB. Dave went into the insurance business early in his career, and then was off to seek adventures in Australia working different jobs while pursuing his passion for skydiving. He spent 30+ years jumping all over the world and meeting many friends along the way. Midcareer, Dave settled in Edmonton, Alberta and worked for the Alberta Motor Association until retirement. He then returned to his hometown of Fredericton to be closer to family. In his later years he enjoyed boating with his son Chris and shooting pool with lifelong friends Bob and George.

There will be no visitation or funeral by request. Arrangements have been entrusted to Bishop’s Funeral Home, 540 Woodstock Road, Fredericton, NB. If you wish to make a donation in David’s memory, please do so to the Fredericton SPCA.