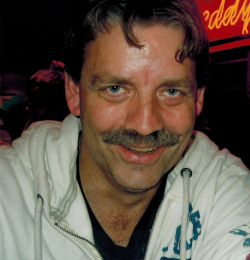 It is with profound sadness that the family of John Manning announces his passing at the Dr. Everett Chalmers Hospital in Fredericton NB, on April 26th, 2022. John was born on February 18th, 1962, in Washington DC USA.

John worked for many years at Home Depot as an assistant manager, and had a degree as a botanist. His passion was landscaping and design. John spent a lot of 6 AM mornings at the hockey rink with his two sons, of which he was very proud of. When not with his wife and two sons, he spent quite a bit of time volunteering with Habitat for Humanity.

Arrangements have been entrusted to Bishop’s Funeral Home, 540 Woodstock Road, Fredericton NB. There will be no funeral or visitation by request. If you wish to make a donation in John's memory, please do so to the Parkinson’s Foundation of Canada.