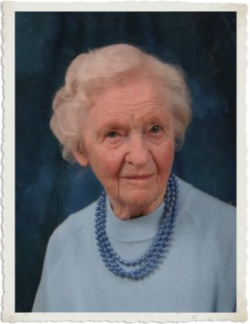 In her 102nd year, Catherine Ina McGinley passed away peacefully at York Care Centre in Fredericton, NB on Tuesday April 19, 2022. Born in Fort Fairfield, Maine, she was a daughter of the late William Francis McGinley and Helen Gertrude (Douglass) McGinley.

A retired registered nurse, she graduated in 1943 from St. Joseph’s Hospital School of Nursing in Saint John. Her nursing career would consist of 8 years as an Operating Room Nurse at St. Joseph’s Hospital and later she would nurse at the County TB Hospital. Upon moving to Fredericton, she was an Office Nurse at the old Regent Street Medical Clinic and then Rookwood Avenue Medical Clinic. For a number of years, she was an Operating Room Nurse at the former Victoria Public Hospital and later worked in the admitting office before retiring.

No visitation by request. A Mass of Christian Burial will be held from St. Anthony’s Church on Friday April 22, 2022 at 11:00 am. Interment in St. Anthony’s Cemetery will be held at a later date. Bishop’s Funeral Home 540 Woodstock Road Fredericton, NB have been entrusted with the arrangements.

Memorials to the Extra Mural Hospital Foundation, Canadian Diabetes Association or a charity of the donor’s choice would be appreciated by the family. Condolences and the sharing of memories may be expressed through www.bishopsfuneralhome.com

Catherine devoted her life to helping others and unselfishly gave of herself for the betterment of mankind. She was loved and will be missed immensely.