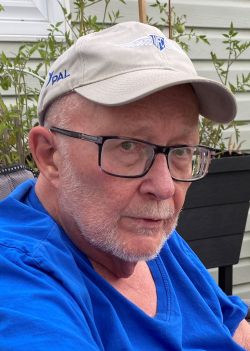 At the Dr. Chalmers Regional Hospital in Fredericton on April 15, 2022 John Doutre of Waasis, NB passed away at the age of 72. Born in North Bay, ON, he was a son of the late Felix Aimie and Ellen May (Martin) Doutre. In the later part of his life John picked up the game of golf and loved it. He played at numerous courses all over North America. John also occupied his time, later in life, driving shuttle bus for the Flight College.

He is survived by his loving wife of the past 8 years, Michele; a son Allen Doutre of Lincoln; 2 grandchildren Allen John Doutre and Ethan Alexander Doutre, both of Ontario; step-children Vicki Austin (Ben) of Ottawa, ON and Tyler Austin of Keswick, ON; 2 brothers Robert Doutre (Darlene) of Sudbury, ON and Maxime Doutre of North Bay, ON; also survived by nephews.

A private interment will be held at a later date. Bishop’s Funeral Home 540 Woodstock Road Fredericton have been entrusted with the arrangements.

No flowers by request, contributions to the Canadian Cancer Society would be appreciated by the family.

Condolences and the sharing of memories may be expressed through www.bishopsfuneralhome.com