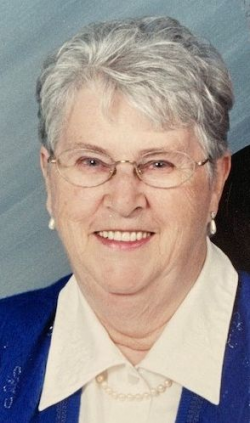 Visitation for Shirley will be held at Bishops Funeral Home, 540 Woodstock Road on Friday May 20th from 6-8pm. A Funeral Mass will be held at St Dunstan's Catholic Church on Saturday May 21st at 1PM.

The family of Shirley Bernice MacDonald, of Fredericton, NB announce her passing on April 14, 2022 at the Dr. Chalmers Regional Hospital in Fredericton, at the age of 87. Born in St. John’s, NF, she was a daughter of the late Benjamin and Lydia (Chatfield) Knee, and wife of the late David "Dutch" Laughlin MacDonald. Shirley was a member of St. Dunstan’s Roman Catholic Church in Fredericton, and Kinette member of the Kinsmen’s Club since 1965.

A celebration of Shirley’s life will take place at a date and time to be announced in the coming months. Interment will take place in Torbay, NF at a later date. Bishop’s Funeral Home 540 Woodstock Road Fredericton have been entrusted with the arrangements.

No flowers by request, memorials may be made to World Vision or the Kidney Foundation.

Online condolences and sharing memories may be expressed through www.bishopsfuneralhome.com