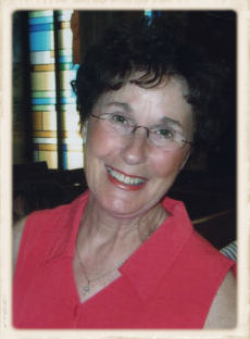 It is with heavy hearts that we announce the peaceful passing of Evelyn (Mary) Fitzpatrick (Goodine) of Fredericton, New Brunswick.  Evelyn passed away on April 13, at the age of 81, leaving to mourn her loving family and friends.

Evelyn was predeceased by her parents, Eileen Kennedy and Ralph Goodine and brothers Tony and Billy Goodine of New Market, NB.

She leaves behind her husband of 55 years, Peter Fitzpatrick and her adoring children, Ann (Mitch), Michael, Pamela, Sean and Theresa; her beloved grandchildren Amanda Mabie, Quinn and Kane Fitzpatrick, Cole and Brody Edmundson.  She is also survived by her dear sister Theresa Daley (Lester) and brother Ralph Goodine as well as her many nieces and nephews.

Evelyn was born and raised in New Market, NB until the time that she left to attend Nursing school in the Miramichi where she developed lifelong friendships.  She settled in Fredericton to raise her family and spent many years working at Pine Grove Nursing Home, where she continued forming her lifelong friends.  She had many passions in life, she was avid gardener and spent many hours working in her vegetable and flower gardens over the years.  Evelyn was a wonderful cook and baker, and many would ask her to make her special donuts for them to enjoy.  Dancing was also something that she loved to do, from square dancing in the 1980’s to her more recent love of ballroom dancing with her steadfast partner in Peter.  Evelyn though, took more joy in the lives of her children and the most joy in her grandchildren.  She was a constant guiding light and love in her children’s lives and her grandbabies were spoiled by their Grammy.

Evelyn came into this world a fighter arriving months before she was due, and left this world in the same way, leaving us much too soon.

Visitation will be held on Monday April 18 from 2-4 and 7-9pm at Bishop’s Funeral Home, 540 Woodstock Rd. Fredericton, NB with the funeral mass following on Tuesday April 19 at 12:05pm from St. Dunstan’s Church, 120 Regent St., Fredericton.

For those who wish, donations can be made to Hospice House, Fredericton.

Online condolences and sharing of memories may be expressed through to www.bishopsfuneralhome.com