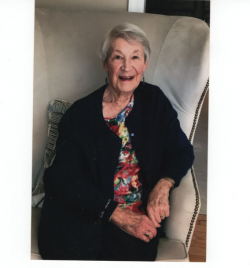 It is with great sadness that the family of Nadine Ralph announces her passing on January 12, 2022, at the Dr. Everett Chalmers Hospital in Fredericton, NB.

Nadine was born August 27, 1930, in Sweetsburg, Quebec.  Nadine was the daughter of the late Nason M. Ingalls and Mildred R. Ingalls (Phelps).

Nadine was predeceased by her loving husband William (Bill) Herbert Ralph; they enjoyed over 66 years together.

Having lived through the Great Depression, World War II and a global pandemic, Nadine had a deep appreciation for even the simplest gifts of life.  Nadine’s greatest passion was her family; she worked tirelessly to care for her loved ones.  Nadine taught in Ormstown, Quebec, where she met Bill.   They raised their family in Montreal and retired to Fredericton in 1982.  Over the decades Nadine and Bill forged many lasting friendships.  Both were always ready for a game of bridge.  They thoroughly enjoyed their travels, exploring North America and abroad.

Nadine supported many charities including the War Amputees and the Salvation Army.

Thank you to the staff at the Shannex for their caring and cheerful dispositions.

There will be no funeral or visitation at this time. The sharing of memories and online condolences can be made at www.bishopsfuneralhome.com.