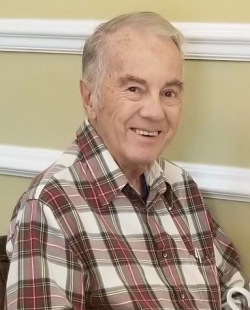 Eldon Robert Maston peacefully passed away on January 7, 2022, at the Dr. Everett Chalmers Hospital.  Eldon was born on December 12, 1932.  He was a lifelong resident of Fredericton.  He was the son of the late Thomas and Eileen Maston. He was married to Anne Munn of Ludlow, N.B., who predeceased him in 2014.

During his adolescent and teen years, Eldon and his parents resided in the residential portion of the York County Jail, where his grandfather was the resident Jailer.  Eldon’s mother provided much of the domestic responsibilities for the Jail.  He had many unique experiences during this time.  You did not have to know Eldon for very long before he would begin recounting the life forming stories of those years.

Eldon held several positions over a thirty-five-year career in the federal civil service, retiring in 1987 as the Townsite Manager at CFB Gagetown.  After his retirement from the civil service, he served for a period as the Chief Electoral Returning Officer for the federal riding encompassing Fredericton.  In his retirement he enjoyed many years as a volunteer driver for Fredericton Meals on Wheels and the relaxed, friendly pace of golf at Carmen Creek.

For most of his life his passion was tennis. He played whenever he could and was a competitive singles and doubles player.  He greatly enjoyed the friendships that he made through tennis. He was instrumental in the establishment of the initial indoor tennis club in Fredericton and was a member of the Abony Family Tennis Centre.  When he hung up his tennis racket at the age of 84, he was proudly the oldest active member of the club.

At various times he was involved in the Home and School Association, Fredericton Non-Profit Housing, and was a proud early member of the Fredericton Co-Op.

Eldon had a strong commitment to his Christian faith and was an active and faithful member of Brunswick Street Baptist Church.  He was an usher for over fifty years and served on various Boards and Committees.

For the last two and a half years of his life Eldon resided at Windsor Court.  He deeply appreciated the caring support of the staff and the many conversations that he had with his fellow residents.  He referred to Windsor Court as "home."  The family wants to express sincere gratitude to the staff and residents of Windsor Court in making it Dad’s home.

Dad was fortunate to have the caring support of many health professionals during his final years.  There are many of you, and the family is deeply grateful to all of you.  We also want to acknowledge all the caring staff at the Dr. Everett Chalmers Hospital, with a special thanks to the Palliative Care Unit.  You are all working in extraordinarily difficult circumstances, yet your compassion is remarkably undiminished.  Thank you.

Bishop’s Funeral Home & Crematorium 540 Woodstock Road Fredericton are in charge of the arrangements.  Although there will be no visitation, a memorial service will be held at the Brunswick Street Baptist Church on Saturday May 14th at 11AM with Rev Greg Geldart officiating, assisted by the Very Rev. Geoffrey Hall, followed by a private family commital.  Everyone is welcome to attend the service at the church however, the family has requested that those who do please wear a mask.  The service will be live streamed at https://youtu.be/LqbOyQhJidM

In lieu of flowers, memorial donations may be made to Brunswick Street Baptist Church, or the charity of the donor’s choice. Online condolences and sharing of memories can be made at www.bishopsfuneralhome.com