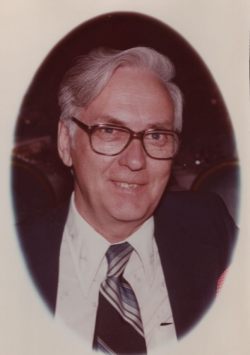 With sorrow we announce the peaceful passing of William Allison Winton, 98, on  January 10, 2022, at the Veterans Health Unit in Fredericton. Bill was the son of the late Jim and Bertha (Archibald) Winton of Jacquet River NB.  He was predeceased in 2014 by his devoted wife of over 66 years, Joy (Glendenning) Winton.

Bill was born in Jacquet River on December 30, 1923, the third of five sons. He served overseas with the RCAF during WWII, and afterwards with the Reserves of the North Shore Regiment. Before and for a short time following the war he worked for the Bank of Nova Scotia. He married in 1948 and settled in Bathurst. He worked for ten years at Bathurst Power and Paper, leaving for a position at CKBC Radio in 1958. Over the years he rose to the position of managing director, becoming shareholder and President of Bathurst Broadcasting Company, a business later known as Radio Atlantic which included CKBC, CKCL and CKTO-FM in Truro NS, CKDH in Amherst, NS and CFNB in Fredericton.  In the glory days of the small-town radio station, Bill’s guiding hand helped each one to serve its local community. Other business interests included the Kent Theatre (later operated as Bathurst Twin Cinemas), Bathurst Travel, and shares in The Tribune weekly newspaper in Bathurst. Bill was president of the Atlantic Association of Broadcasters 1974-75 and was honoured in 1987 as Broadcaster of the Year for Outstanding Contribution to the Industry. He was on the board of directors of the Canadian Association of Broadcasters from 1980-82.

Always generous with his time and talents, Bill had many interests outside of business. He served as a City Councillor in Bathurst and three terms on the board of directors of Chaleur Regional Hospital. He was on the boards of several charities, and a member of the Royal Canadian Legion. He was a member and trustee of First United Church. His friends, children and grandchildren are ever grateful for his encouragement and open hand.

Bill spent over twenty happy summers with the family at the cottage in Salmon Beach. Of many memorable vacation trips with Joy over the years, one of the most notable was a trip to France in 1987 for a tour of Normandy and the dedication of the monument to the North Shore Regiment.  In 1982, when their children had grown, Bill and Joy moved to Fredericton where they joined St. Paul’s United Church and made many new and renewed friendships there and in the community. Bill retired from business in 1988 but continued active with two of his long-time favourite sports, curling and golf, his home on Wildwood Lane being ideally situated near the Fredericton Golf Club.  After Joy’s passing, he spent several years at St. Anne’s Court retirement home in Fredericton, taking part eagerly in the social life there.

Bill was the last surviving member of his immediate family, pre-deceased by his brothers Graham, Donald, James and Evan; and one grandson Edward Ferguson.

Cremation has taken place.  A graveside memorial will be held in the summer at Spruce Grove Cemetery in Bathurst.

Sincere thanks to the kind and dedicated staff at the Veterans Health Unit. For anyone wishing to offer tokens of sympathy, the family would appreciate donations to The Heart and Stroke Foundation.

"The righteous man’s children shall be blessed; his memorial shall prove everlasting." Psalm 112.