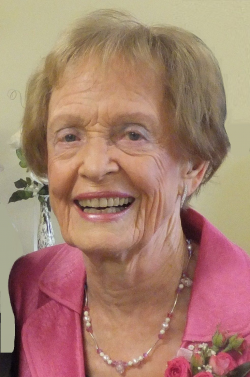 It is with a heavy heart that we announce the passing of Mary Elizabeth Rioux (Pearce) of Fredericton NB. She passed away peacefully on January 2nd, 2022 at Hospice Fredericton. Born in Ft. Fairfield, Maine on April 21st 1932, Mary was the eldest child of the late George and Kathleen Pearce.

Mary’s childhood and adolescent years were spent in Bathurst, where she graduated from Bathurst High School. Following graduation, Mary worked as an administrative assistant at the Bathurst Power and Paper Co. before settling down in Fredericton to raise a family. Mary was a woman of deep faith with strong moral values, who would always give generously of herself to others. She was a caring, loving mother, grandmother and great grandmother. For Mary, her family was first and foremost.

For many years Mary was the smiling, welcoming face that greeted students at the University of New Brunswick’s Residence Services office, where she was employed from 1973 until her retirement in 1993. Mary’s outgoing bubbly personality endeared her to so many, which ensured her of numerous good friends throughout the years.

Music played a tremendously important role in Mary’s life. Having taught piano for many years, she was a decades-long member of the Fredericton Music Teachers’ Association. And if she wasn’t singing in a church choir or tinkling the keys of her piano or church organ, she would be found dancing – her greatest joy of all - to her favourite songs. There is no doubt she will still be dancing in the afterlife! Mary was also an avid walker. Many a day she could be seen briskly striding along Fredericton’s sidewalks and trail system. A wonderful cook, who loved dinner parties and having a fun time, Mary was up for almost any adventure it seemed. In that regard she loved travel, especially cruising, which she embarked upon dozens of times.

While in her retirement years she cherished her stays in sunny Florida with brother Bob and sister-in-law Murielle. Or spending time with them at the cottage on Salmon Beach in Bathurst during the summer. They enjoyed a truly exceptional bond.

Mary’s life has been memorialized at the University of New Brunswick through the Mary Rioux Bursary, as well as the Fredericton Music Festival via the Mary Rioux Scholarship for Junior Piano.

The family would like to thank the palliative care doctors, extra-mural nurses and the staff at Hospice Fredericton for the exemplary care they gave Mary in her final days.

In lieu of flowers please donate to Hospice Fredericton, the Canadian Cancer Society or a charity dear to your heart.

Albert Einstein is credited with saying, "Only a life lived for others is a life worthwhile." Therefore, Mary’s life ought to be considered exceptionally so. May she rest in peace