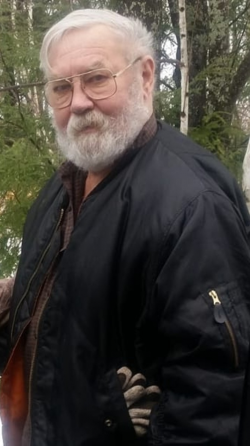 Gahan, Charles (Charlie) Leo Patrick, age 73, passed away peacefully at home on November 20th, 2021 after a long illness. His loving wife Opal (nee Lapointe) of 56 years by his side in their home on Richibucto Rd.

Charlie was a very hard worker, he was an owner/operator truck driver for Day & Ross for over 35 years. At different stages of his career, he worked as a heavy equipment operator, in the woods, for Levine' s, Charmac,  Gahan Brothers Ltd 1991,  and so many more throughout the years. He loved his Western Star (his bride) and drove 2365 and 2366 over the roads for such a long time.

Devoted to his family and church, Charlie was a man of few words but, when he spoke, others listened. However, he did have a sense of fun and a quick wit. He loved to gently tease his daughter's friends and they all remember him fondly. He enjoyed visiting friends and family for a cup of tea and a slice of homemade brown bread. One of his very favourite outings was going to The Cabin restaurant down on Woodstock Rd for a full breakfast with his Daughter Kelsie, friends and family as well. He very much enjoyed making a good feed of pancakes washed down with lots of milk.

He loved Chevy trucks, working on vehicles and machines, going for drives around which may or may not have ended with a stop at Tim Horton's. He was a long standing member of the Apostolic Faith Church and well loved by his church brothers and sisters. His presence will be missed.

Charlie was survived by his beloved wife, Opal, His brother, Harold

As well as many nieces,  nephews and cousins.

Thank you to his Nurses and Doctors over the course of his battle of sickness within his body in the last 5 years.

A Virtual Zoom Funeral service will be at 6 PM
Reception to follow at the homes of Kelsie Sullivan and Opal Gahan, which are side by side at 6 and 8 Homestead Rd, off of Richibucto Rd.

In lieu of flowers arrangements donations can be made to the Alzheimer's Society or the Canadian Cancer Society. The family would love to get Love Mail, please send or drop off a letter to his dear wife, Opal, with favourite memory of Charlie and a pack or two of garden seeds/plant/tree for her to grow in his name

Bishop’s Funeral Home & Crematorium have been entrusted with the arrangements. The online sharing of memories and condolences can be made at www.bishopsfuneralhome.com