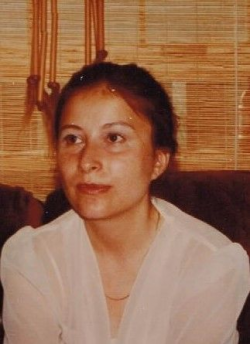 I am deeply saddened by the passing of my mom Gizella (Georgina) Corey. I am also honoured to share some of my thoughts, and fondest memories of her. I feel that it is important to express, and acknowledge our feelings, and emotions, as we say goodbye. Since gathering now has been greatly restricted, I would like to encourage you to use comments to take part in our effort to share memories.

Some of my earliest memories of my mom were in Fredericton. I remember living in a rooming house on Regent street. I wasn't old enough to go to school yet. My mom was juggling me, a job, and going to University. She was studying anthropology. She stayed up late studying with me nearly every night. Her books were so amazing, she read some of them with me, mythology of ancient Greece and Egypt, dinosaurs, and neanderthals. She even took me with her to her classes a few times. It was an exciting adventure for me, I had no idea how hard it must have been for her. She was young and inspired.

Many of the friends she had met in university became lifelong friends and family, and to this day they are the closest people to me My dad John Lewis, and my late Uncle Ron. She was very outgoing, fun, and witty.

She had a passion for music, and played several instruments. She taught me how to read music and to play the recorder. When we moved to Waterloo Ontario, she developed a love for photography she took photography classes, she even showed me how to use her cameras and how to develop the film. We had a lot of fun taking photos together. She was very talented.

She moved to Chelsea England for a while when I was about 12. I went to visit her that summer and we had the time our lives. We went to festivals, and concerts. We toured the city, Big Ben, and St, Pauls Cathedral, but our favourite was Tootsies ice cream parlour just a few blocks from her flat. She was adventurous and she loved getting out to see the world.

After moving to Maryland just outside of Washington D.C. My grandmother passed away, and my mom started getting tumours. Our time in the U.S was the most difficult and challenging time of our lives. We moved to Montreal shortly after, where her tumours were removed, and she started getting back on her feet again. She was a fighter, and a survivor.

I left home in Montreal and my first apartment was only a block away. I had a bit of a party one night and she woke me up the next day and told me that I had been evicted. She took me back in, and I tried again a little while later. She was kind and forgiving.

I met my wife Suzanne, her son Germain, and her mom Mrs. Beaudoin in Montreal. We moved to Toronto Ontario. My mom moved to Cole Harbour Nova Scotia, where she taught high school. Suzanne and I would visit her with my Uncle Ron in the summer times. She was a teacher.

My mom moved to Minto New Brunswick where she met Rolfe Corey. He was her neighbour, her friend, and her companion. They were married and he spent the rest of his days with her. He was kind and loving to her. She was loved.

She will be missed, and she will always be in my heart.

The family of Gizella (Georgina) Corey (ne Horvath) are sad to announce Georgina's unexpected passing on October 2, 2021 at 3:15 am at the age of 67. Georgina was born on October 15, 1953 in Budapest, Hungary. She was predeceased by her parents, Gyula and Klara Horvath, survived by her only son, Shannon and wife Suzanne, one grandson Germain and wife Wendy and two great granddaughters Elysanne and Aurianne. She was the youngest of three siblings, Judy Gyuk Hughes and Rozalia O'Leary; three nieces and a nephew, namely Judy Savoie ("Cuni"), the late Kathleen Gyuk ("Kati") and Liz Clark; one nephew Michael Turquotte; three great nephews (Judy Savoie’s children): Andrew Blair, Patrick Savoie, and Matthieu Savoie.

A life speckled with incredible adventures and obstacles, Georgina lived without regret. She had loved and lost love yet persevered every day facing health challenges, she chose to live her life how she wanted to: peacefully in the best possible way she could. She spoke three languages, loved books, music, photography, art, cooking, gardening, restoring old homes, cats (Cilla) and dogs, especially her beloved old English sheep dog (Alexi) and border collie (Mishka).

Her family immigrated to Canada in the spring of 1957 when Georgina was three years old. They lived in Toronto for many years but settled in Fredericton for a quieter life and job opportunities. At the tender age of 17, Georgina became a teenage mother and raised her only son, Shannon. She adored Shannon and was fiercely proud of the wonderful compassionate hardworking young man he is today. Georgina led an amazingly interesting life in at least five countries as she, Shannon, and her ex-husband travelled extensively across the continent while they successfully pursued careers and university education. She was immersed in university and educational environments for most of her life, actively involved in supporting various causes. As much as she loved her career path in academics, her greatest passion and sense of reward was in working with special needs and troubled youth.

Georgina returned to New Brunswick where she grew up and spent the last sixteen golden years independently. She had lost her partner and companion four years earlier. A year ago, Georgina bought a house in Fredericton to be near her older sister and best friend, Judy, who had lost her youngest daughter, Kathleen (Georgina's youngest niece and goddaughter) at the beginning of the pandemic in 2020. It was a comforting decision for the siblings to be closer during the unprecedented times, having aging health concerns and the family still freshly grieving.

Georgina was also close to her sister’s family who resided in the area. They feel blessed for sharing in the joys of their lives in family celebrations together for the latter years since Georgina moved back to New Brunswick, a gift that they all are very grateful for. Although Georgina did not live close to her son (Shannon) and his wife, her son and family meant the world to her. She often mentioned her contentment in the knowledge that her three nieces had maintained a strong bond and connection with Shannon over the years. Despite the long distance and passage of time, the cousins fondly recall their baby brother-like attachment to him since he had spent much of his infant and pre-school years at his grandparents and aunt’s home while Georgina kept up with her university studies.

Georgina was a mother, a daughter, a grandmother, a sister, an aunt, a great aunt, a friend, a mentor, an elder, a colleague, a teacher. However, she was also so much more to every person who knew and loved her. She has touched and influenced each of her loved ones in a fundamental and different way, but the lessons she taught are universal. To have unconditional love, to be kind to others, and to live life in a way that satisfies and makes a person the happiest. May Georgina rest in peace.

For those who wish, memorial contributions can be made to your local womens shelters, and S.P.C.A

A poem by her sister Judy

Georgina She was born in Budapest,

The sweetest, best, and prettiest,

I held her hands so she could walk,

And in my arms, she learned to talk.

With each day, she grew more fair,'

My little sister with ginger hair.

In school she really did excel,

She loved to read and write and spell.

More pretty and wise by the day,

She treasured books and time for play.

Good times with friends, dogs, and horses too,

The instruments she learned and knew.

For the world to her was new,

So sweet and kind, this flower child.

Her heart with passion, free and wild.

A babe herself she had a son,

Her carefree days were quickly done.

As love for Shannon was her aim.

My baby sister and best friend,

Her faithful love will never end.

Shannon's mother. and all who love her,

In our lifetime, there is no other.

By your loving sister, Judy XOX