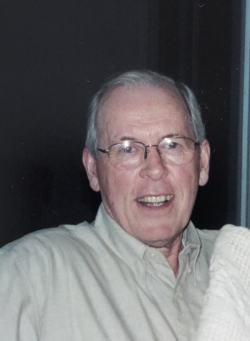 Kenneth B. Parker of Fredericton, NB passed peacefully at the Dr. Everett Chalmers Regional Hospital on September 11, 2021. Born in Sudbury Ontario, he was the son of the late Clifford and Elva (Bonnell) Parker.  Kenneth was the husband of the late Opal (Hubbard) Parker.

Kenneth was a member of St. Dunstan’s Catholic Church where he held the position of Church Deacon for many years.  He was a member of the Canadian Military, serving as a Captain in the Air force.  He was proud of his career as a navigator flying the CF100 and was posted in various locations nationally and abroad.

He was an avid traveler and was especially fond of cruising. It was not only the travel but the trip planning, the detailed itinerary and the stories which made it one of his passions.

He was a lover of the finer things in life, good food, social gatherings, wine and 12 year old single malt scotch whiskey.

Those with fond memories of Kenneth include his sister Patricia Matte (Jack) nieces and nephews living in the Maritimes including Linda Sharpe (Dennis), Kim Sharpe (Dianne), Tanya Foran-Breen (Cliff), Brenda McLean, bother-in-law Richard Miller, sister-in-law Edna Vickerman, cousins and partner Lilian Hughes as well as their families and many friends.

In addition to his parents and wife, he is Predeceasedby his sister Joan Price.

Visitation will be held at Bishop’s Funeral Home, 540 Woodstock Road, Fredericton, NB on Tuesday, September 14 from 6-8 PM.  A funeral mass celebrating Kenneth’s life will be held on Wednesday, September 15 at St. Dunstan’s.  Following the mass there will be an Interment at the Miramichi Cemetery and then a reception at Tanya and Cliff Breen’s residence. Memorial Donations may be made to Dr. Everett Chalmers Hospital Foundation, the St.  Dunstan’s Church or a charity of the donor’s choice.

Online condolences and sharing of memories can be made at www.bishopsfuneralhome.com

For those who are unable to attend the service, a live stream will be available by going to Kenneth's online obituary and connecting through the video link.