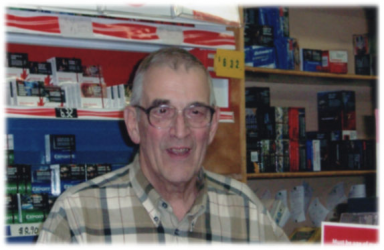 It is with great sorrow, but a life well lived that we announce the death of Johnny Mazzuca, born and lived all of his life in Fredericton on February 28, 1935. He was the son of Gabriel (Bill) and Virginia (Dobbelsteyn) Mazzuca.

He is survived by his sister Josie and his brother Gus. He is also survived by many cousins in Canada, United States, Holland and Italy. Johnny has many great friends, too numerous to mention, but two in particular who always kept in touch – Dr. Eddie George of Houston Texas and Willie O’Ree of San-Diego California.

Johnny, along with his brother Gus, owned and operated Mazzuca’s Variety Store at 79 York Street for over 70 years. He was a great businessman, always treating his customers with a smile and a happy greeting and was loved by all.

Johnny had many loves during his life, ladies being number one; animals- always a dog biscuit for the dogs who came to the store and stood by the counter, but his best love was the Toronto Maple Leafs. He owned everything with the Maple Leafs right down to the underwear. When the Leafs won the Stanley Cup in 1967, he had an open house at the store and gave the ladies a rose and the men a cigar.

Following the close of his business, he felt he needed to give back to the community that supported him, so he volunteered at the DECH, Meals on Wheels, the Aiken Center, to name a few. He was a member of the Nashwaaksis Lions Club, the Rotary Club and Epsilon Y’s Men. Johnny was a faithful member of St. Dunstan's Church and was an Usher and Collector.

Memorial Donations in Johnny’s memory may be made to the Fredericton Homeless Shelters, St Dunstan’s Church, Fredericton SPCA or a charity of the donor’s choice. Online condolences and sharing of memories may be made at www.bishopsfuneralhome.com

We will all miss you, Well Done – Good and Faithful Servant.