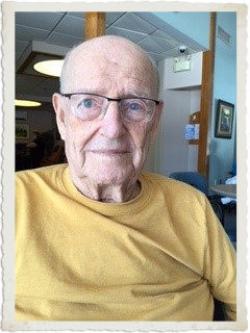 It is with sadness the family of Elie J Richard of Fredericton announce his passing at White Rapids Manor in Fredericton Junction on June 22nd, 2021, after a brief illness.  Born in Rogersville NB on September 13th, 1932, he was the son of the late Alyre and Josephine (Martin) Richard.

Dad retired from the Department of Transportation as a heavy equipment operator and a highway supervisor.  He enjoyed fishing, hunting, gardening, wood working and his Montreal Canadiens.  Dad and Mom lived in Lincoln and raised their family on the banks of the St John River.  In 2008 Mom went to White Rapids Manor. Dad moved to Fredericton Junction to be closer to mom.  After her passing, Dad continued to volunteer at the manor.  The family would like to thank the many people in Fredericton Junction area who befriended dad and made him so welcomed.  We would also like to thank the nurses and staff at White Rapids Manor who took excellent care of Dad.

There will be no visitation, a mass celebrating Elie’s life will be held at St. Francis of Assisi Catholic Church, Lincoln NB, for immediate family on June 26th, 2021, at 12 Noon.  Interment to follow in the adjoining cemetery.  Covid Restrictions and protocols will be in place at the Church.  Guests wanting to attend Elie’s service are asked to contact the Funeral Home at 458-1885.

In Lieu of flowers donations to the Alzheimer’s Association or a charity of the donor’s choice would be appreciated.

Online Condolences and sharing of memories may be made at www.bishopsfuneralhome.com