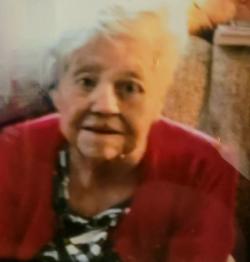 With profound sadness we announce the passing of Doreen Thomas, our loving mother, grandmother and friend. She left us much to soon, at her home with her family by her side, on May 15, 2021.  Doreen was born on April 24, 1943 in Enniskillen NB, to her loving parents, the late Kenny and Lena (Shannon) McCann.  Doreen later became the wife and best friend of the late Jack Thomas.

Doreen lived a full life as a wonderful mother, homemaker and worked as a cook for the DND and the well known former Tic’s Restaurant in Welsford NB. She loved to play bingo, enjoyed going 4-wheeling and camping.

The thing that Doreen enjoyed the most in her life was her family. Her children and her grandchildren brought her great pride and there was nothing she wouldn't do for them. She will be dearly missed and forever in the hearts of her daughter, Mary-Anne Munn; sons, Joe Ogden, Brent Ogden and Robert Ogden. Her 15 grandchildren and 12 great-grandchildren will miss her dearly but will have wonderful memories to hold onto forever.  Over the past few months, Doreen found trust, companionship and fun times with her special friend Norman Reid who was stood by her faithfully, before and during her Illness.

While we are sad to see her go, we are grateful for her time here with us, she will be reunited with her parents, her late husband and her sister, Mary Elizabeth.

It was Doreen’s wishes that there be no visitation or funeral service. A private family graveside service and burial will take place at the Cardigan United Church Cemetery.

Memorial donations in Doreen’s memory may be made to the Cardigan United Church Cemetery or a charity of the donor’s choice. Online condolences and sharing of memories may be made at www.bishopsfuneralhome.com