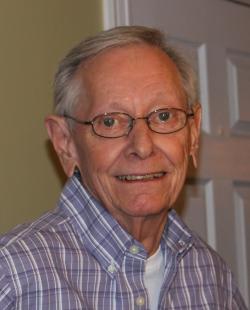 He was born in Salisbury England on January 11, 1943, moved to Scotland, and then immigrated with his family to Halifax in 1952. After marrying and starting his young family in Quebec, he moved and settled happily in Fredericton where he spent his career working for the provincial government.

If you were so lucky to have known John, you would know he was a handsome, devilish man with fine, big ears. He was thoughtful, patient, and a calming presence.  An anchor to his wife and two daughters.  He was known for his dry sense of humour, and whenever asked how he was doing, he replied "I’m perfect …you have to start your own rumors".  John appreciated a cold beer, a good book, and spending time with his 4 grandsons and family.

To his grandsons, Dakota, Gabriel, Joshua and Beck, he left the wonderful memories of story-time, water gun fights, and a passion for reading, as well as the wisdom of how to beat the final level of Donkey Kong.

To his daughters, Debbie and Jackie, he left the wisdom of appreciating the value of quiet moments, long hugs, and how to pee over the side boat without tipping it.

To his wife, Noella, he left an enduring love, full of joy, laughter, and dedication, which began the first day he saw her. They created many great memories playing cards, visiting family in Montreal and Nova Scotia, and raising their girls.

John is survived by his wife Noella, two daughters, Debbie Maynard (Joel) and Jackie Van Dijk (Marty), and his grandsons Dakota, Gabriel, Joshua and Beck. He is also survived by his siblings in Nova Scotia, Penny Pothier, Andy Watt (Susan Zettell), and Sheila Watt (Andy McVicker) and a loving gaggle of nieces and nephews.

The family deeply appreciates the excellent personal care and compassion given from Dr. Peter Dickinson, the Extra Mural team and the palliative care team. At the request of family, there will be no service, and a private celebration of life will be held at a later date. For those who may wish to do so, memorial donations in John’s memory may be made to the Big Brothers, Big Sisters Association, or a charity of the donor’s choice.