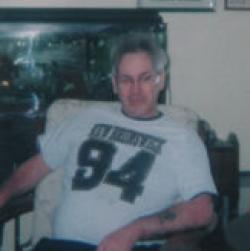 The passing of Terry Wayne Robichaud of Harvey Station, NB, Occurred at the Dr. Everett Chalmers Hospital on April 12th, 2021.  He was 69 years old.  Born in Fredericton, he was a son of Marven and Rose (Robichaud) Turnbull.

Terry was a storyteller, always reminiscing of days gone by.  He enjoyed taking walks to the store and having a good cup of tea.

He is survived by his brothers, Hal (Hazel) Turnbull and Ronald (Christine) Turnbull, as well as several nieces and nephews.

A special thank you to the staff of Swan Haven Nursing Home for all the care and compassion given to Terry during his 10 years with them.  Also, a thanks to the Drs, nurses at the DECH during his time there.

There will be no visitation or service by request.  Interment will be held at a later date.

Bishop's Funeral Home Ltd., 540 Woodstock Road Fredericton has been entrusted with his arrangements. Online condolences and sharing of memories may be sent through to www.bishopsfuneralhome.com