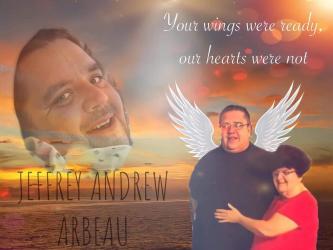 It is with heavy hearts and great sadness that the family of Jeffrey Andrew Arbeau of Waasis, NB, announce his sudden passing on Wednesday, January 6, 2021, after suffering in pain for many months, at the young age of 36.

Jeff was predeceased by his paternal grandparents, Eldon & Viola Arbeau; his uncle, Kevin Arbeau and his aunt, Rosanna Comeau.

Jeff was a big teddy bear who was loved by all who knew him. Jeff loved making people laugh with his stories, silly antics, and rap skills. He was the life of any family gathering and any other type of social gathering. He would give you anything he had and do anything he could for you.

Our hearts are completely broken.

Jeff started working for McMinniman’ s Moving & Storage when he was in high school and worked there for many years. He met many people in this journey and was told that he was a great worker, and they couldn’t believe his strength.

For those who wish, donations may be made to the Canadian Diabetes Association or to a charity of the donor’s choice.

We would like to give special thanks to Jeff’s closest friends, you know who you are, and we appreciate all you have said and done for us.

Due to current gathering restrictions, a celebration of Jeff’s life will be held at a later date with details to be announced at that time.

Personal condolences may be offered through www.bishopsfuneralhome.com