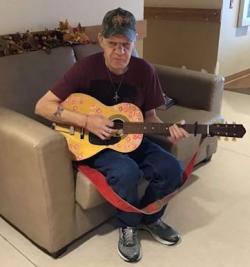 The family of David Louis Tattrie are saddened to announce his passing at Fredericton Hospice on January 7th, 2021.

On March 04, 1955, David began his life in the quaint little town of Tatamagouche, Nova Scotia. At three years old, his family moved to New Brunswick, where he spent his life between Oromocto, Harvey, and Gagetown.

David lived a full life, where he collected many interests and hobbies. Among his favourite was reading, as he always had a book in his hands. David also loved music, especially playing his guitar or harmonica along to anything Johnny Cash. While mostly out of tune, his music was beautiful to his brothers and sisters.

David was an avid hockey fan (Montreal Canadians, I know, right!). He was also a longtime baseball fan (especially the Toronto Blue Jays, since he was convinced they would win the World Series again). David supported his teams by proudly wearing their jerseys, hats and collected their trading cards.

David looked forward to spending time each summer at Camp Rotary on Grand Lake, where he had many friends and happy memories. Every year, David paid respect to his longtime hero Terry Fox, by participating in fundraising and completing the run with his best friend, John Redmond. But more than any other activity, David loved holidays, especially Christmas!

David was an unforgettable guy. He was kindhearted, fun-loving, and a good person. David had the best sense of humour and loved joking around with everyone. He never spoke a cross word against anyone. He was a true role model!

David loved all his nieces and nephews and would have the biggest grin on his face when the younger ones were all running around him, screaming and having fun. His niece (Ashley Ryan) spent time with him indulging his creative side, which meant multiple-coloured pictures, which he loved to adorn on his bedroom walls.

Our family would like to give special thanks to our brother-in-law John Redmond whom David adored. John spent many hours with David over the past years, whether it was enjoying a cup of coffee together or just taking a walk. Their friendship grew out of mutual respect for one another, and they enjoyed spending time together. To his sister, Lori, who loved him unconditionally, opened every opportunity for him, ensured his happiness and always put him first. To his sister, Rhoda, who provided solace and companionship during some of his most difficult times. To his mother, Martha, whose visits to him at the Fredericton Hospice provided him with the kind of comfort and love that only a Mother can give.

A memorial service will be held at a later date.

Bishops Funeral Home, 540 Woodstock Road, Fredericton NB, has been entrusted with his arrangements. Due to current Covid health restrictions, there will be no visitation or funeral services at this time. For those who wish, memorial donations in David's memory can be made to the Terry Fox Foundation, Fredericton Hospice or a charity of the donor's choice. Online condolences and sharing of memories may be made at www.bishopsfuneralhome.com.