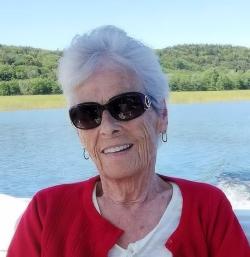 It is with great sadness that the family of Catherine (Cassie) May Scovil announce her peaceful passing on Jan 6, 2021 at the Dr. Everett Chalmers Hospital, at the age of 84.

Cassie was born in Chelmsford N.B August 17, 1936 the daughter of the late George and Emma Connolley. After a short career in the nursing profession, she married the late Edward Scovil, who passed in 1979, and together they had five children: Miles, Barbara (Mike), Grace (Pat), James (Kim), and Michael. She is also survived by William Macallan

She is predeceased by her brothers Tommy and George (Noonie), as well as her sisters Mary, Ruth, and Peggy.

Cassie loved music, dancing, playing cards, trips with her girls, spending time by the river, and let us not forget bingo!

The Family would like to express heartfelt thanks to 4 SE at the DECH for the care and compassion shown to Cassie throughout her time there. Due to COVID restrictions, there will be a private family service at a later date. For those who wish, donations in Cassie’s memory can be made to a charity of the donor’s choice.

Online condolences can be made at www.bishopsfuneralhome.com
Click here to View Condolences
Requested Charity
Donors Choice