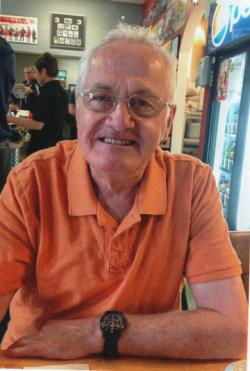 Our Dad left us peacefully on Sunday January 3,2021 at the York Care Centre. He was born on Feb. 17,1937 in Durham Bridge, N.B. He was the son of the late Albert and Gertrude (MacLean) Wall.

He grew up in Rabbit Town (Victoria Street) Fredericton and was proud of it. He worked at Willit Fruit, Lawson Motors, (Texaco) and at Elm City Chrysler, He really enjoyed his Volunteer work at York Care Centre which he found rewarding for many years. He enjoyed being around Family and Friends and a good laugh. He also enjoyed fishing, camping, and playing Crib (some say he cheated) He enjoyed going on the City Bus, enjoyed going to the City Market and to Church.

Due to Tuesday’s Department of Health announcement of NB returning to the orange phase, the family will be postponing the visitation for Charles until further notice.  Interment will take place in the Fredericton Rural Cemetery at a later date.