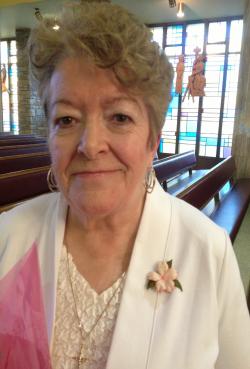 It is with sadness, we friends of Eleanor, are announcing her passing on Christmas Eve, December 24, 2020, at the Dr. Everett Chalmers Hospital in Fredericton NB.

Eleanor was born in Glace Bay, Cape Breton, daughter of the late Frank R Colman Professor of Engineering at UNB and the late Hazel (Rutherford) Coleman. She left behind no immediate kin but her extended family of loving friends are many. She was particularly grateful for the friends of Bill W. and Saint Dunstan’s Catholic Church for all their love and support.

She grew up in Halifax and in Fredericton where she graduated from Fredericton High School in 1958, Teacher’s College in 1959, and UNB in 1963. She excelled in writing and won many poetry awards. Following her education, Eleanor worked at the UNB Library and soon moved to Boston Massachusetts working both as a legal secretary and for an international security firm. In Boston, she married the late William Kemmeitt. In 1970 she returned to Fredericton where she worked in various jobs and married the late Hal Nason.

Her accent was incongruent to the fact that she maintained a colourful spirit of Cape Breton. Eleanor was a passionate reader and a writer of both short stories and poetry. She had a strong faith in God and loved dearly her extended family of friends that centered her life. She always said because of them she is with the God of her understanding. She was very pleased that Saint Dunstan’s Catholic Church welcomed her so warmly with support and friendship when she joined the church in 2010. She was also very grateful in later life for all the faithful caregivers who came to her home. They gave her not only care but friendship.

Eleanor was an animal lover having had many loved pets. She left behind her sweet black cat, Reggie. One of her important priorities was that when she left this world Reggie would be looked after. She longed for her late lab ‘Kattie’ who lived to 17 years old and will most likely be waiting patiently at the Gates.

A memorial service will be held at a later date.

RIP Eleanor Nason. May your spirit fly and the days be sweet from here on!!