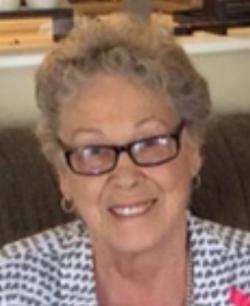 The family of Roberta Mae Richard nee Dunlap is saddened to announce the passing of their loving mother, wife, grandmother and great grandmother on Saturday, November 14th.

Bobbi, as she was known to all, is predeceased by her first husband, Donald Francis Rogers, her parents, John and Lena Dunlap, of Fredericton; her brothers, Arthur (Marlene), Wayne, Jack (Theresa), her half-brother, Clark Curtis (Mary), her only sister, Doreen Phillips (Robert) and also her brother in law, Ted Rogers (Betty), sisters in law, Bernice Mehlitz (Zeigfried), Anne Jewett (Murray).

Bobbi is survived by her husband, Bob John Richard, and his two children, grandchildren, and great grandson. She also leaves behind a half-sister in law, Miriam, in Florida. She was blessed with three children, her daughters, Debra Lynn (Kevin), Dartmouth, NS, her son, Donald Martin Rogers of Ottawa and her daughter, Penny (Terry) Fredericton, NB Her four granddaughters were the apples of her eyes. Sarah Vowell (Alex), Melissa Mackereth (Jacob), Lisa Boreland (fiancé Ryan Wright) and Abbie Boreland. She was so proud to be a great grandmother to Nolan, Jade and Julia. She loved her family dearly.

She was kind, loving and funny. Bobbi loved music and loved to dance. Boating on the Saint John River with Bob, and sometimes with family members aboard, made Bobbi extremely happy. She loved the river. Later in life, she discovered her love of watercolors and she painted some beautiful pictures. She was a proud member of the Legion Branch 4 for 45 years and she was honored to be a member of the Ladies Auxiliary of the Police Veterans Association.

Due to the Pandemic, there will be a private family only memorial service, with interment to follow in the Fredericton Rural Cemetery.

We would like to thank the nursing staff and doctors of 3SW DECH who kept her as comfortable as possible during her stay. In lieu of flowers, should friends desire, donations can be made to the charity of their choice by the family.

The online condolences and sharing of memories may be made at www.bishopsfuneralhome.com