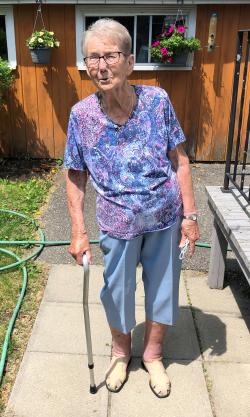 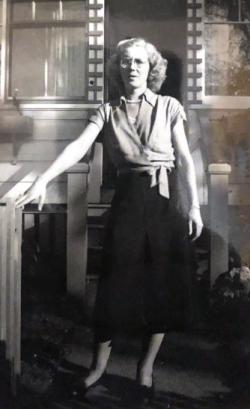 She is pre-deceased by her parents, Theodorus and Reina (Van Der Vliet), her first husband, Louis Wedge (died 1966) and her second husband, Harold Cogswell.

Reina was born in the Netherlands on November 10th, 1924 and came to Canada with her parents in 1952.  Her family built their home on York Street, where her parents remained until they died. Reina met and married Louis, who was a Staff Sergeant in the Army, and had two children while moving multiple times for military postings.  Widowed in 1966 with two young children to raise, Reina worked as a civilian for the RCMP until her retirement 1985.  In 1986, she re-connected with Harold, whom she had originally met during the liberation of Holland while he was serving as a Lance Corporal.  They were together until his death in 2006, although he spent his last few years at the Veteran’s Health Unit.

Reina was a Toronto Maple Leafs fan to the end, she enjoyed quilting, reading and time spent with family.  She was an avid gardener and loved spending time in her yard.

Her health began failing during her last year but with the help of her loving family and friends, she was able to stay in her home until she suffered a heart attack this fall.  She spent her few remaining weeks at Hospice House in Fredericton, where she (and her family) received the best of care from the very kind and compassionate staff.

Reina was never afraid of hard work or speaking her mind.  She always told it like it was. She could crack a joke and take one as well, as long as it wasn’t about hockey!  She was loyal to and loved her family.  She lived and died on her own terms.  She leaves behind a space that can never be filled.  Loved and missed by all who knew her.

A celebration of her life will be held for her family only.  With the ever changing situation, a gathering of family and close friends may be held at a later date.

For anyone wishing to make a donation in her memory, please consider Hospice House or a charity of your choosing.