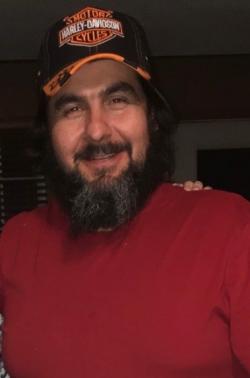 John leaves behind his loving family, his wife Amanda (Nash), his pride and joy, Savannah (Gavin), Autumn and John Jr.

He is also survived by his parents Brian and Janice (Sabattis) Keenan.   He leaves behind his sisters Sarah (Josh) and Janie (Shawn) and his brothers Brian Jr and Donald James (Lindsay), nieces and nephews and great nieces and nephews.  He is also survived by his loving in-laws Paul and Elaine Nash. John will be missed by the family pets Shilo and Koda and his predeceased companion, Peanut.

John had a large extended family of Aunts and Uncles and cousins who survive him as well and will miss him.

He was predeceased by nephews Eldon, Chevy, Joseph and great-niece Harper Mae.

John's first love was his family!  He always enjoyed helping anyone who needed a hand.  Working was a passion with John especially working at Modern Ventures.

John was a well-loved person and had many close friends who were always there for him and he for them.  He loved playing crib and poker, and a good hunting trip.  He had a great admiration for Harley Davidson's.

John will be resting at 19 Hiawatha Court, Oromocto beginning Thursday October 1st.  Due to Covoid restrictions, masks MUST be worn during visitation.

Funeral service will be held at St. Vincent de Paul, Oromocto, NB by invitationonly.  Also due to Covoid, masks must be worn at the funeral as well.  Please respect the guidelines we must follow.

Interment will be held on Monday, October 5th in the St Vincent de Paul Cemetery at 11am.  Social distancing will be practiced.

Donations in John’s memory may be made to a fund established for his children by donating directly to the family or a charity of the donor’s choice.