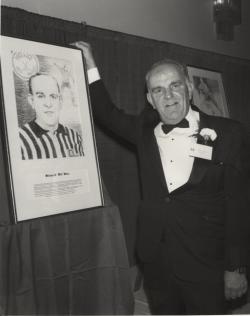 The passing of W.B. "Wiff" Miles of Fredericton occurred on Sunday August 30th, 2020 at the Pine Grove Nursing Home.  He was 87. Born in Fredericton he was the son of the late Henry and Vera (Boddington) Miles.

He was predeceased by four brothers, Arthur, Joseph, Donald and Ralph, and his wife Enid "Cookie" Miles (Coy) in 1982, the love of his life.

He worked at J.S. Neil and Sons, Scott Concrete, the Fredericton Exhibition and the Alcohol and Drug Commission before his retirement in 1990.

Wiff has left a legacy of innovation and success unmatched in his hometown.

He was a pioneer in New Brunswick hockey refereeing circles for single-handedly working to elevate the quality of hockey officiating in New Brunswick. In his own words, "it was the best in the nation," according to the New Brunswick Sports Hall of Fame, to which he was inducted as a builder in 1989.

Among his many achievements as a referee and executive was to draft a constitution and by-laws, establishing the New Brunswick Referees Association in 1968, to which he served 12 years as President.

He literally refereed thousands of games and was chosen as a Canadian representative on a team that traveled to Sweden and the former Soviet Union in 1969. There he refereed games in Leningrad.

Executive awards from New Brunswick Hockey and Fredericton Area Minor Hockey, led to another induction, the City of Fredericton Sports Wall of Fame in 1992.

Wiff was inducted into the Fredericton Raceway Wall of Fame in 2008 for lifetime achievement.

No matter which role he took on, he had a reputation for being a "tenacious" and "no-nonsense official".

Visitation will be held at Bishop’s Funeral Home, ‪540 Woodstock Road, Fredericton ‪on Wednesday September 2nd from 4-7 PM.  Social distancing measures will be in effect.  A family Interment will take place in the Forest Hill Cemetery.

For those who wish donations may be made to the Canadian Cancer Society or the NB Diabetes Association.

Bishop’s Funeral Home have been entrusted with the arrangements, online condolences and sharing of memories may be expressed through  www.bishopsfuneralhome.com