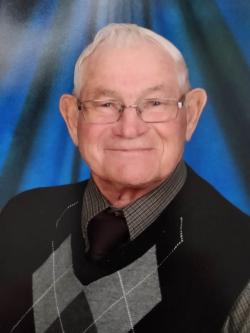 It is with great sadness that the family of James (Jim) Archibald Smith announce his passing on July 5, 2020 at the Oromocto Public Hospital, Oromocto, New Brunswick.  Jim was 91 years of age and was born in St. Eleanors, P.E.I on December 29, 1928.

He was predeceased by his parents William and Doris (Lockhart) Smith, his wife of 58 years, Elsie (Nickerson), son-in-law Robert Estey and his two sisters Shirley (Wilkins) and Vera (Mosher).

Jim will be sadly missed by his daughter Evie Estey, Whitehorse, Yukon, his sons Edward (Wendy) Fredericton, Donald Smith, Edmonton, Alberta and his stepson Eldridge Nickerson (Caroyln), Cape Sable Island, Nova Scotia. His grand-daughters Kelly (Scott), Jill and Kathy (Rob) and his three great- granddaughters; Isabella, Gabrielle and Zoe.  He always wanted to know how those "girlies" were and "The Old Black Dog", "Buddy"!  He will also be missed and fondly remembered by his dear friend Roy Dickinson and the camp buddies.

He was Jamie to his family, Jim/Jimmy in his adult life, Slippery Smith at the track and later to be dubbed "The Legend"; his response back to you was, "You got that right Big Boy"!  Jim had a very storied life. He was most proud of the 40 years he worked for Tractors and Equipment.  His title, "mechanic", he relished in telling stories of all the CAT engines he repaired and the great people he met along the way.  Jim had the utmost respect for the owner, Mr. Campbell, and held him in very high regard.  One could say Jim was the "original company man". Jim was a well known horse owner and driver at the Fredericton Raceway.  His first race was in 1946 and he bought his first race horse, "Bobby Lee Volo" in 1951. Jim owned and trained somewhere between 75 and 80 horses. After some 68 years in the sport, Jim retired from racing at 80 years old.  Commemorating 60 years as owner, trainer and driver at the Fredericton Raceway he was inducted to the "Fredericton Raceway Hall of Fame" May 4, 2007.  Next on his story list was the many trips he and Elsie made to the Yukon to visit their daughter Evie and stopping in Edmonton to visit their son Don. Driving across Canada in the summers and flying in the winters.  They loved being their own "pioneers".  Although his favorite place was his hunting and fishing camp near Doaktown.  He was often quoted as saying, "this was the best money I ever spent" as he looked off the deck and down the river.  Jim loved hockey and he always boasted about the years he coached his son Ed and the Racers Edge Hockey Team.

We are so grateful for the wonderful staff of the Gagetown Special Care Home for providing Jim with a great home, great care and love. As you all said, "He was one of a kind"!

Bishops Funeral Home, 540 Woodstock Road, have been entrusted with the arrangements. Visitations will be held on Thursday July 9th from 2-4 and 7-9pm. Staff from Bishops will be on hand to assure that the current Covid-19 restrictions and social distancing practices are being followed.  A committal service will be held on Friday July 10th at 2pm at the Rural Extension Cemetery, Fredericton NB.

For those who wish, donations can be made to the Alzheimer's Association of Fredericton.  Online condolences and sharing of memories may be expressed through www.bishopsfuneralhome.com