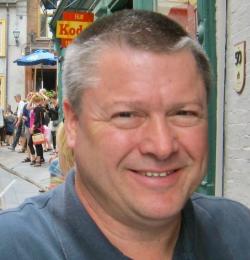 It is with great sadness that we announce the sudden death of Darrell Comeau, 56 years young who passed away peacefully on June 25th, 2020, at his residence in New Maryland, NB.

Born in Chatham, NB, May 27th, 1964, he was the son of Eric & Ann Comeau of Miramichi, NB.  He is survived by his parents, his son, Ryan (Melanie) of Halifax, NS; his daughter, Alysia (Brandon) of Geary, NB; his life-loving partner, Carrol Long and her daughter, Ashley; his sister, Linda (Alistair) of Clairemont, ON; his brother, Stephen of Miramichi, NB; and Rose Patstone (the mother of his children) of Long Reach, NB.  His mother-in-law, Mary Lavoie, whom he had many laughs and really enjoyed her company; his Godmother Carmel Gallimore, and his furbaby, Bailey.  Many nieces and nephews that he loved and adored.

Darrell graduated from James M Hill High School in 1983, and further his education at NBCC (Miramichi) graduating from the Small Equipment Mechanics program and later from NBCC Saint John (1995) from the Mechanical Engineering (HAVAC) program.  Darrell worked for his Dad at Chatham Marine for many years and later worked at Sea Tech, MacLaggan Engineering, Neil & Gunter, and was employed with Stantec Consulting as a Senior Mechanical Technologist at the time of his passing in Fredericton, NB.

Darrell enjoyed music and was a Disc Jockey with his good friend, Mike Brideau, for many years on the Miramichi.  Darrell and Carroll spent many hours together boating, fishing, and snowmobiling. He enjoyed the cottage life in one of his favorite spots on Grand Lake also doing these wonderful things with the extended Lavoie family whom he loved to be around. He loved to sit back and relax, have a good drink or two of good old Crown Royal, while listening to his great collection of vinyl. He was mechanically inclined and was well-known throughout his family, friends, and community, as the guy that could fix anything he touched.  He was also the guy that would lead a hand to anyone that needed it.

He had many wonderful friends throughout his childhood that remained lifetime friends including Rick Forrest, Mike Brideau, Percy Marsh, Peter and Robert Malley, and many others.  Darrell had a place for everyone in his life.

Darrell’s laugh, positive attitude, and huge smile was bigger than life and he passed this on to his beautiful children, Ryan and Alysia, who will carry these traits with them forever reminding us of their Dad’s gentle and peaceful attributes.

In Darrell’s memory, donations may be made to The Heart & Stroke Foundation or Saint Michael’s Capital Campaign.