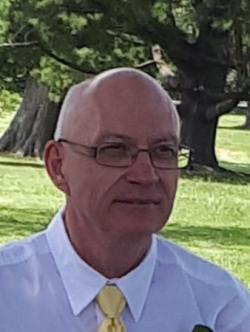 It is with great sadness that we announce the sudden passing of Earl Barrie Gray Duffield on June 25, 2020. Born on May 19, 1957, He is the son of Barrie and Joan (Humes) Duffield.

For many years Earl and his family Operated Log Home Video. Earl previously worked at the North Side Walmart for thirteen years. He had a great love for computers and music. His favorites were the Rolling Stones, The Blues and Buddy Guy. He also enjoyed Antiques and he and Kenneth attended many craft shows.

Resting at Bishop’s Funeral Home, 540 Woodstock Road Fredericton, where visitation will take place on Monday June 29th from 12 noon until 1PM for family, and from 1-3 PM for friends with distancing measures in place, following the government stipulation.

Following the visitation, we will be travelling to the Zionville Cemetery for the committal service and burial with Pastor Michael Trail officiating. Donations to the Fredericton SPCA or the Zionville Cemetery would be apricated. Online condolences and the sharing of memories may be expressed through www.bishopsfuneralhome.com