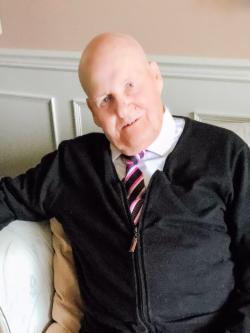 Albert D. Clark of Fredericton, born March 21, 1932, in Marysville and adored husband of Ardith A. (Cliff) Clark, passed peacefully into the arms of Jesus on June 6, 2020, at Dr. Everett Chalmers Hospital in Fredericton.

In his early years, Albert worked for the Marysville cotton mill and became foreman of machinery operations. After becoming a licensed mechanic, he worked for various automobile dealerships, obtained several diplomas for his trade, and opened his own service station. Albert also had a real interest in carpentry and later used those skills both for other businesses and himself, as he formed his own construction company and led the reconstruction, renovations, and operations management of Beulah Camp in Browns Flat. Albert never wavered in his faith in God and always displayed a quiet spirit in every situation. He was a conscientious man and worked hard and well in his labour of love and service to the church. He never refused to help the many people who came to him with a variety of projects.

Albert and Ardith were married in 1953 in the Reformed Baptist Church in Fredericton and settled in Marysville where Albert built two homes to accommodate their growing family of three children, whom he loved and adored. He also built a cottage on Beulah Campground where they spent their summers. They loved to travel and enjoyed trips across Canada, the U.S., and Europe to visit with family and friends.

A memorial service will be announced at a later date. Arrangements are through Bishop’s Funeral Home.  Donations in Albert’s memory may be made to Beulah Camp, Kingswood University, or Journey Wesleyan Church.