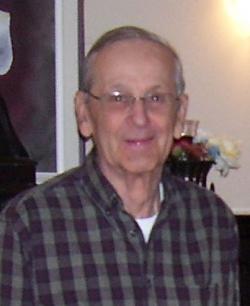 It is with great sadness that the family of Burpee Jones, loving husband of Freda (Gallagher) announces his passing on Thursday, June 4th, 2020 at Hospice Fredericton at the age of 92.  Burpee was born in Upper Keswick, NB, on November 7th, 1927, to the late Byron and Pearl (Brewer) Jones. In addition to his parents, Burpee was predeceased by his daughter, Lorraine; two sons, Dwayne, and Dwight; sisters, Joyce Pugh (Paul), Norma VanBuskirk (Bill); brother Paul Jones (Zora) and son in law, Arthur Hazlett.

A painter by trade, Burpee spent his career working at Facilities Management at the University of New Brunswick for over 25 years where he made many lifelong friends.

Burpee was an avid outdoorsman and truly enjoyed nature.  He shared his passions of hunting and trapping with his children and grandchildren to whom he was much more than a grandfather.  To many of his grandchildren he was a loving, devoted and dependable father figure.

Burpee was a kind and gentle soul and his cup was always half full.  He always looked on the sunny side of life and always found much to be thankful for each day.  His positive attitude and entertaining stories about the old days will be greatly missed.  His favourite saying after each visit was "keep your stick on the ice."

The family would like to extend sincere gratitude to the staff of Paradise Villa, the DECH palliative care unit and to the staff of Hospice Fredericton for the loving and compassionate care he received.

Bishop’s Funeral Home, 540 Woodstock Road, Fredericton, NB have been entrusted with the arrangements. A private graveside service will be held at the Burtts Corner Community Cemetery on Monday June 8th. For those who would like to make a donation in Burpee’s memory, the family have suggested the Hospice Fredericton or donor’s choice.  Online condolences and the sharing of memories may be expressed through www.bishopsfuneralhome.com