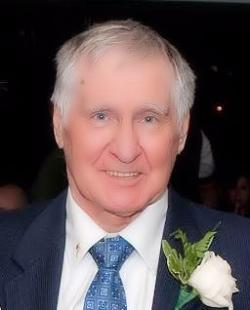 It is with profound sadness that we announce the passing of William John (Jack) Dunlap, of Fredericton, at the Dr. Everett Chalmers Hospital in Fredericton, NB, on May 1, 2020. He was 86 years old.

Our dad leaves behind our mom, the love of his life for 68 years, Theresa (McSorley) Dunlap of Fredericton. Dad and Mom had the kind of love everyone believes in, but rarely sees. They were married in 1957, and created a huge, raucous family of seven kids who loved him beyond words.  We knew we were loved infinitely and that he was incredibly proud of us, and he never missed a chance to tell us. He was thoughtful, caring and always had a band-aid in his wallet, just in case mom got a hangnail. And he always had a hug and a kiss for us.

Papa was an incredible person, father, grandfather, and husband. We are the luckiest kids in the world to have had him as our dad, our papa and our great grandpapa. He taught us everything. He gave us everything, even when he didn’t have much to give.

Papa was predeceased by our sister, Lori, his mother, Lena (MacKay), father John, brothers Art, Wayne and Clarke, and his sister, Doreen. He is mourned by his beloved sister, Bobbi (Bob Richard). He was a man of strong faith, and was a member of St. Dunstan’s Church for many years, where you could find him in the front row on Sundays. Dad had previously been a proud member of the Knights of Columbus.

Papa suffered from the effects polio since the age of four, but that never deterred him. He took care of us and everyone, he fixed houses, cars and taught us all how to play hockey and baseball. He also coached hockey for many years at various levels, including the Junior A Saint John Combines in the 70s. He worked as a draftsman for Department of Public Works in Saint John, until his retirement in the early 90s.

Papa never complained. Not when he had heart attacks and cancer, not even when he couldn’t get out of bed. He did make a fuss when he had a cold, though, like most men ;). He was also the guy who pulled over to get a wounded duck off the road, and brought it home to care for it. He wiped our tears, kissed our cuts and scrapes, and always had time to talk about hockey and his beloved Habs.

Papa was a man of unshakeable faith, and he instilled that faith in us. We know he is  with the Lord, and our sister was there to greet him. That must have been something to see!

Our hearts are broken, and we will always miss you Papa.

Tim, Linda, Kelly, Greg, Jennifer and Bridget, and the grandkids

There will be no visitation or service at this time. Bishops Funeral Home, 540 Woodstock Road, Fredericton NB, have been entrusted with the arrangements. In lieu of flowers, the family have suggested that memorial donations may be made to the Christian Childrens Fund or the St. Dunstans Church. Online condolences and sharing of memories may be made at www.bishopsfuneralhome.com