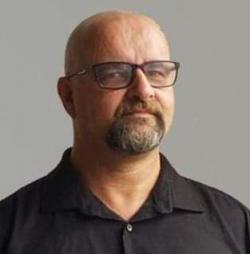 It is with broken hearts that the family announces the death of a cherished husband, loving father, devoted son, protective big brother and uncle, Darren William Shears on May 29th 2020 after a short but hard fought battle with pancreatic cancer at the age of 53.

Darren met his wife Heather (LaBrie) who he adored in 1987 and they married in 1993. Together they have three children: Erik Jack, Kyle John, and Taylor Rita, all of Fredericton. He was the son of Ralph and Janet (Holmdon) Shears of Fredericton. He will be missed by his sister Susan Bishop (George) of Bellville ON, nephew Matthew of Calgary, and niece Kelsey of Kingston NS.

He will be missed at family dinners by his In-laws Jack and Yvonne (LaBrie) Murphy of Chipman, sister in law Sarah Murphy-Christopher (Galen) of Bermuda and brother in law John Murphy of Chipman. He is survived by many uncles, aunts, and cousins.

Darren will be deeply missed by his family, but his death has also left a huge void in the IT community. To his family, he was their computer geek god, but he did not fit the geek mould you expected. In his career, he was a Senior Technical Architect with the Province of New Brunswick, and had recently became Technical Practice Lead at Bulletproof, and had the respect of his colleagues. He lived and breathed IT, it was his drug of choice.

When Speaking of Darren, his colleagues described him as a mentor, coach, friend, and the go to guy who always had the answer. Microsoft had recently listed him as an incredible force of knowledge and support in every assignment he did and was top in his league in the Microsoft Cloud and messaging community.

Due to restrictions on Gatherings, a memorial service will be planned at a later date.

For those who wish, memorial donations can be made to the MS Society, Sara Burns Police Memorial Fund, or to a cahrity of the donor's choice. The sharing of memories and online condolences can be made at www.bishopsfuneralhome.com.