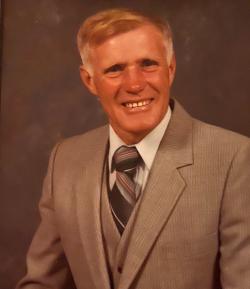 It is with great sadness, that the family of James Merritt, announce his peaceful passing on April 23, 2020 at the York Care Centre, Fredericton, New Brunswick. He was the son of the late William and Laura (MacDonald) Merritt.

He will also be missed and fondly remembered by sister Marion Campbell of Oshawa, ON; sister Betty Caron of Miramichi; brother David Merritt (Shirley) of Napan; sister Jean Ervine of Prince George, BC as well as many cousins, nieces and nephews.

James was born in Chatham, NB in 1934. At an early age, he discovered a love for the outdoors and gardening. He helped his father place vegetable displays at the Miramichi Agricultural Exhibition and won awards; at one time they displayed 49 different vegetables.

After he moved his family to Fredericton, his love of the outdoors continued. He had a regular presence at the Fredericton Market selling various items such as kindling wood and Christmas wreaths. He loved to work with his hands. He worked hard all his life raising his family and making sure all their needs were met. He loved to pick apples in the fall and help a local farmer bring in his crops. He was unselfish; always looking out for others.  He had a special fondness for his many friends from the Miramichi. He will be missed by his many friends and acquaintances.

James attended and was actively involved at Smythe Street Cathedral for many years. He helped in the construction of the Cathedral; parked cars during services and events; whatever he could do to help was his way of life and always offered a welcoming smile of encouragement.

Due to the current Public Advisory regarding COVID-19, there will be no funeral service or visitation at this time. There will be a celebration of his life at a later date to be announced.

In lieu of flowers, the family request that donations be made to Smythe Street Cathedral, Fredericton. Online condolences and sharing of memories may be expressed through www.bishopsfuneralhome.com