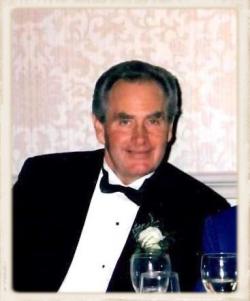 It is with extreme sadness that the family of Harry Allison Libbey announces his unexpected passing on Apr 9, 2020 at the Dr. Everett Chalmers Hospital in Fredericton, New Brunswick.

Harry was the eldest child of Glen Alison Libbey and Lila Mary Tucker. He was predeceased by his parents and siblings: John Dale, twins Mary Elizabeth and John Douglas, and his daughter Rosalinde.

Harry will be sadly missed by his wife of 59 years Jackie (Hossack), his daughters Heather (David Woo) and Sandra (Shawn Pickard), his grandson Liam and of course his white kitty. He will also be missed and fondly remembered by several sisters and brothers-in-law, nieces, nephews, cousins, and lifelong friends.

Although he was born in Fredericton and proudly spent his entire life in Fredericton, Harry had a special fondness for his many relatives from the Miramichi.

Determined to do it ‘his way’, over the years, Harry founded his businesses:  Eastern Pavement Markings, Eastern Electric, and All-Nu Renovations.   He was never satisfied sitting still and happily ran his business well into his late 70’s.  Although he was a few months shy of his 79th birthday, he usually acted like he was still 21 years of age.

Harry was a proud member of many communities and organizations including the Village of New Maryland, Boy Scouts, Royal Canadian Legion Branch #4, Epsilon Wise Men's Club, Knights of Columbus, and Ducks Unlimited.   Harry will also be remembered for his long involvement with the Fredericton Exhibition where he ran his Crown and Anchor table for years and a canteen in earlier days. His love of the FREX courtesy of his grandfather’s business – The Libbey Shows.

If Harry couldn’t reach you by phone (which he was always on), he could always find you with his ear-piercing whistle.  He will forever be remembered by his good-natured humor, joking around and singing while contently working all hours of the day and night.

With an outgoing personality, everyone knew when Harry Libbey was "In the House". He often put his own needs aside to help others, so few were not touched by his kindness and generosity.  It is not surprising that Harry was blessed with many friends and numerous acquaintances throughout New Brunswick and the rest of the Maritimes.

Due to the current Public Advisory regarding COVID-19, there will be no funeral service or visitation at this time.  A slideshow with pictures of Harry may be viewed at https://vimeo.com/406902435/c97fd3bb94/

True to Harry’s nature, a funeral and Celebration to commemorate his life will be held at a yet-to-be-determined time and place when it is safe to do so. Until then, toast Harry safely at home to songs such as "King of the Road" or "My Way".

In lieu of flowers, the family request that donations be made to the Canadian Mental Health Association and or the Fredericton SPCA.

Online Condolences and sharing of memories may be expressed through www.bishopsfuneralhome.com