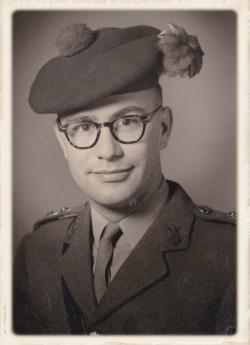 Bruce Melville Fraser, passed away on Feb 16, 2020 at the Dr. Everett Chalmers Hospital.

He was born in Truro, Nova Scotia, June 1936 to the late Lawrence and Margaret (Schaffner) Fraser. He joined the Black Watch (Royal Highland Regiment of Canada) in 1956 and remained a member for his full 35 years of service. He was a member of the Legion and the Black Watch (RHR) Association of Canada.

Bruce travelled to many places in the world while in service, including Cyprus, Germany, Barbados and Italy. He retired while stationed in C.F.B Gagetown then continued to travel with his wife Muriel. One of his favourite places to be was still the family cottage on Brule shore in Nova Scotia.

His main love was his family, the center of his life. He avidly researched the family genealogy and continued to stay in contact with extended family around the world. He even travelled to Scotland to research the archives in Edinburgh and Kiltarlity.

He loved the outdoor life and was one of the first Queen’s Scout Award recipients in Canada. He continued his commitment to the Scouts for many years as a leader, in which he helped teach his three boys many life lessons, including wilderness skills, camping and fishing. In retirement he enjoyed coffee and breakfast with friends, going to the Co-op multiple times a week to shop and socialize as well as being a season ticket holder for UNB Varsity Reds Hockey.

Bruce was predeceased by his wife Muriel (nee Brown) and his parents.

The family would like to thank the Staff of Extra-mural program for their kind and compassionate care.

There will be no funeral by request. A casual visitation will be held at Bishop’s Funeral Home, 540 Woodstock Road, Fredericton on Friday evening, February 21, 2020 from 7pm to 9pm.

For those who wish, remembrances may be made to a charity of your choice. Online condolences and sharing of memories may be expressed through www.bishopsfuneralhome.com