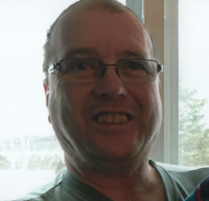 With heavy hearts, the family of Robert Alan King announces his passing on February 8th at his home in Mazerolle Settlement, NB.  Born in Fredericton on September 10th, 1958.

Robert worked at different locations as a truck driver and dispatcher, he loved sports (especially the Toronto Maple Leaf’s) and enjoyed his cat George. Robert loved his family, especially his stepchildren but when it came to his grandchildren, nothing brought him greater joy.

There will be a time of visitation to celebrate the Life of Robert at Bishops Funeral Home on Friday February 14 from 2-4pm.

If so desired, memorial contributions to the Canadian Cancer Society, Fredericton SPCA or a charity of the donor’s choice has been suggested by the family.