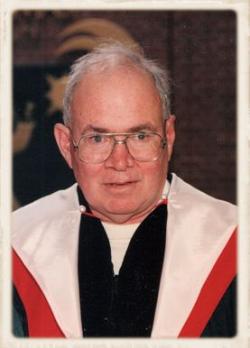 The death of the Rev. Dr. John Joseph Dolan, a retired priest of the Diocese of Saint John, occurred on Wednesday, February 5, 2020 at the Dr. Everett Chalmers Hospital, Fredericton, NB. Father Jack was born in Saint John, NB, on February 15, 1931, son of the late John J. Dolan and Lillian Horgan.

After graduating from St. Vincent’s Boys School, Saint John, and St. Francis Xavier University, Antigonish, NS, Jack began theological studies at the Grand Seminaire, Montreal, QC. Father Jack was ordained in the Cathedral of the Immaculate Conception on May 26, 1956 by the Most Rev. Alfred B. Leverman, Bishop of Saint John. His first assignment was as curate to Holy Trinity Parish, Saint John. Later that year he was assigned as curate to St. John the Evangelist Parish, Johnville. In 1958 he began serving as curate in Our Lady of the Assumption Parish, Saint John, and in 1962 as curate to Holy Rosary Parish, St. Stephen. In 1964 Father was assigned to post-graduate study in Rome where he obtained his Doctorate in Sacred Theology in 1967 from the Pontifical University of St. Thomas Aquinas. Upon return to the Diocese he was named curate to St. Dunstan’s Parish, Fredericton. In 1968 he accepted an additional appointment as diocesan director of vocations.

In 1969, Father Jack was named pastor of St. Dunstan’s Parish. During his years at St. Dunstan’s, he invited the Filles de Jesus Sisters to work in the parish. He was also very involved with clergy and religious leaders from both Christian and Jewish communities. His rectory was always open, and many enjoyed his hospitality. He served there until 1980 when he became pastor of St. Joseph’s Parish, Saint John. In 1987 he returned to Fredericton as pastor of Holy Family Parish where he served until 2013. In 1987 he also began a twenty-five-year term teaching in the Religious Studies Department of St. Thomas University where he was a very popular professor, not only in the classroom, but wherever students gathered. He was deeply loved by students of all faiths and no faith, and he treated all with dignity and respect. More than one student was happy to buy him a coffee in appreciation for his faithful presence among them.    During the summers he continued to develop his knowledge of sacramental theology at L’Institut Catholique de Paris and to shop for the latest theological reading. During these years he also developed a program for Rite of Christian Initiation of Adults, In Memory of Me, which was widely used in various parishes of the diocese. Later he began to go regularly to Spain for studies in Spanish language and spirituality. Father Jack retired as pastor of Holy Family Parish in 2013 but continued to love and serve the parish after retirement. Father Jack was comfortable in church, in the Blessed Sacrament Chapel, in the classroom, in the cafeteria, in the hockey rink, in the various haunts of politicians of all stripes, in the woods, in the bee hive fields, and wherever people were gathered. He lived simply and quietly, but touched many, many lives. Rest in peace, Jack!

Father Jack is survived by his sister-in-law, Patricia, and by his nephews and nieces David, Kevin, John, Bill, Tina, Judy, Frank and Michael. He was predeceased by his parents, and his brother Bill.

Father Jack’s body will be received at Holy Family Church, Fredericton, on Sunday February 9, at 1:00 pm with visitation following in the church until Solemn Vespers at 6:00 pm. His Funeral Mass will be celebrated in St. Dunstan’s Church on Monday, February 10 at 12:05 pm. Interment will take place in a family plot at St. Patrick’s Catholic Cemetery, Saint John, NB at a later date. Funeral arrangements care of Bishop’s Funeral Home 540 Woodstock Road Fredericton.

Online condolences and the sharing of memories can be made at www.bishopsfuneralhome.com