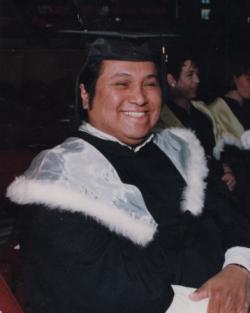 The family of Ned Edward Bear are saddened to announce his passing on December 24, 2019. Born in Fredericton, NB, he was a son of the late Albert and Rebecca (Paul) Bear.

Ned was a sculptor from the Wolistoqiyik First Nations Community in Fredericton, New Brunswick. He was inspired by a Native Elder carver as a young boy, received formal training at the New Brunswick College of Craft and Design, where he became the first aboriginal student to graduate. Bear received additional training at the Saskatchewan Indian Federated College (now the First Nations University of Canada), the Nova Scotia College of Art and Design, and the University of New Brunswick, where he obtained a Bachelor of Education. Ned has made significant contributions as an instructor of Native art and culture, a curator, a guest speaker, and a juror. He has served as the Director of Education for Saint Mary’s First Nation and as a member of the New Brunswick Arts Board. In 2006, he won first prize at the prestigious Face the Nation competition at the UC Davis Design Museum. Bear was pursuing a Masters degree in Native art education at the University of New Brunswick. Ned was very proud of his Cree heritage.

He loved his family beyond measure and enjoyed taking his grandson to hockey.

Although there will be no formal funeral service, the family will receive friends at 157 Maliseet Drive St. Mary’s First Nation on Monday December 30, 2019 from 12:00 noon until 5:00 pm

"We delve into so many past wrongs of our lives that we forget to revel in the present. Learn to capture what you may never have again, now! Do what makes you content for this time, and begin to realize the true purpose of life."  - Ned Bear

For those wishing to make a donation in Ned’s memory, the NB Heart & Stroke Foundation, have been requested by the family. Funeral arrangements have been entrusted to Bishop’s Funeral Home, 540 Woodstock Road, Fredericton (458-1885) Condolences and the sharing of memories may be expressed online through www.bishopsfuneralhome.com