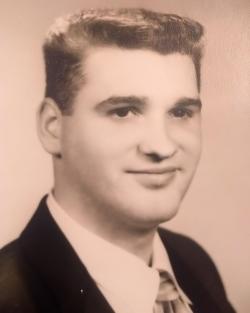 It is with heavy hearts that the family of Joseph Michael Myshrall announces the passing of their beloved father and grandfather at the age of 79. Joe was predeceased by the love of his life, his wife of 57 years, Katharine (Dawn) Myshrall, in May of 2017.

After getting his start as a young man in the grocery business as produce manager at Sobeys in Fredericton, Joe soon flexed his own entrepreneurial muscles, establishing the independent grocery store and lunch counter, The National Meat Market on Queen Street in the 1970s. From there he would go on to run two other popular Fredericton mainstay eateries, Joe’s Restaurant and the Lunch Bucket, where Joe could be found behind the grill with a spatula and a grin, filling orders for his patrons personally.

In his retirement years, Joe enjoyed cheering on his favourite team the Boston Red Sox with an Alpine in hand, working in his well-manicured garden, or giving his wife, Dawn, a run for her money in a competitive round of Scrabble.

The Myshrall family would like to extend their thanks to the staff and volunteers at Pine Grove Nursing Home, where Joe spent his final days under their compassionate care. Staff and visitors there will miss his big smile and quiet sense of humour. Joe is resting at Bishop’s Funeral Home, where, at the request of the family, there will be no visitation. A small celebration of Joe’s life will be held at a later date.

Those who wish to make a donation in Joe’s memory may do so to the Alzheimer Society or to a charity of their choice.