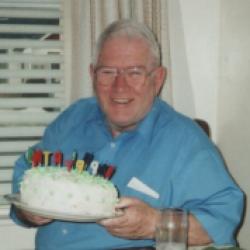 At the Dr. Everett Chalmers Hospital on Sunday December 12, 2019, Dennis R. Morgan of Fredericton passed away at the age of 85. Born in Fredericton, he was a son of the late Kenneth and Gertrude (Porter) Morgan. Dennis spend the majority of his working years employed with NB Power in construction as an insulator, then as a security guard. He loved carpentry and spent a lot of his free time building lawn furniture as well as many other projects. He enjoyed hunting and fishing. Dennis coached minor hockey and played in the oldtimers league, when he lived in Saint John.

Resting at Bishop’s Funeral Home 540 Woodstock Road, Fredericton where visitation will be held Thursday December 19, 2019 from 12–2 pm. The funeral service will take place at the funeral home at 2:00 pm with Rev. Chris Bennett officiating. Interment will be held at a later date.

For those who wish, donations may be made to the Canadian Cancer Society or the Canadian Diabetes Association. Condolences and the sharing of memories may be expressed online through www.bishopsfuneralhome.com