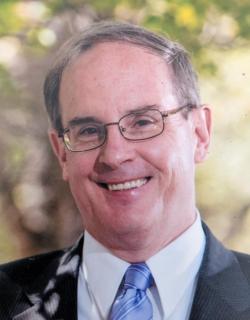 David William Meagher of Fredericton, N.B., died peacefully at Hospice House on Tuesday December 10, 2019 following a courageous battle with brain cancer.  He was 59.

He will be remembered in many ways. To his wife Claudette (Sirois) he was a devoted husband.  To his brother Michael, sister Kathryn, stepmother Kathleen, and his many friends and colleagues he was a man of great integrity and kindness. To his many nieces and nephews, he was the fun uncle we all wish we had.

David was born in Fredericton on December 22, 1959, the second son of the late John and Dolores (Hocker) Meagher.  He grew up in Fredericton and remained a proud lifelong Maritimer.  He was a gifted academic who earned three university degrees: A Bachelor of Arts from the University of New Brunswick, a Bachelor of Journalism from the University of King’s College in Halifax, and a Bachelor of Education from Saint Thomas University.  David parlayed his education into careers focused on fact gathering, writing, and teaching.  From 1982 to 2000 he worked with the Telegraph-Journal and The Daily Gleaner, first as a reporter and later as an editor.  From 2001 to 2008 he was a public-school teacher.  And from 2008 to 2017 he was an editor with Communications New Brunswick and the province’s Executive Council Office.  Across his career he reported on provincial and federal politics, wrote a weekly political analysis column, and interviewed a myriad of political leaders in Canada and the United States.

But his friends and family best remember David for his passions of sport and helping those in need.  David was the neighborhood kid endlessly playing road hockey, ice hockey, and touch football.  As an adult he loved hiking, walking his dogs and sharing camping misadventures with his in-laws.  He was always energized by the ocean; it was where he spent summers with his family, it was the backdrop to his wedding to his first wife Shirley (VanOorschot, deceased), and the honeymoon and frequent vacation destination with his wife Claudette.  Like his mother, David always had a giving heart.  He’ll be particularly remembered for his tireless efforts over the past few years to help sponsor and welcome a Syrian refugee family to Fredericton.  His original assignment was to help the family complete the numerous forms required to register for government services.  But David and his wife went well beyond the call, so much so that they became Uncle David and Auntie Claudette to the family’s four children.

A mass of Christian Burial will be held on Saturday, December 14, 2019 at 12 noon at Holy Family Catholic Church 1500 Hanwell Road Fredericton with David’s long-time pastor Monte Peters as celebrant. In lieu of flowers donations may be made to Hospice House or the charity of the donor’s choice. Bishop’s Funeral Home ltd has been entrusted with the arrangements. www.bishopsfuneralhome.com