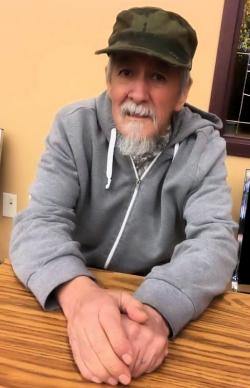 Our beloved father, Thomas Brian Brooks (Tarzan) of St. Mary’s First Nation passed over peacefully into the Spirit World on November 28th, 2019. Tarzan was 66 years young. He was born in Fredericton, New Brunswick and was the late son of Tom Brooks and Geraldine Paul. Tarzan was a man of many trades and traveled the Fair Circuit with the King Reid and Bill Lynch Show. He excelled from a long line of traditional basket makers. You can often find many of his baskets throughout the community. He enjoyed sitting by his picture window, watching a good ole hockey game and having a few cold beers with his buddy "Teddy" as us children would often laugh and refer to them as the "Grumpier Old Men".

Special shout out to Wik-Cihpolakon for their loving and quality care they have given to our dad over the past year.

Tarzan will be resting at his home at 25 Brooks Court, St. Mary’s First Nation. Visitation will place on Sunday, December 1st beginning at 12PM to Wednesday, December 4th where a Mass will take place St. Anthony’s Catholic Church at 11AM.